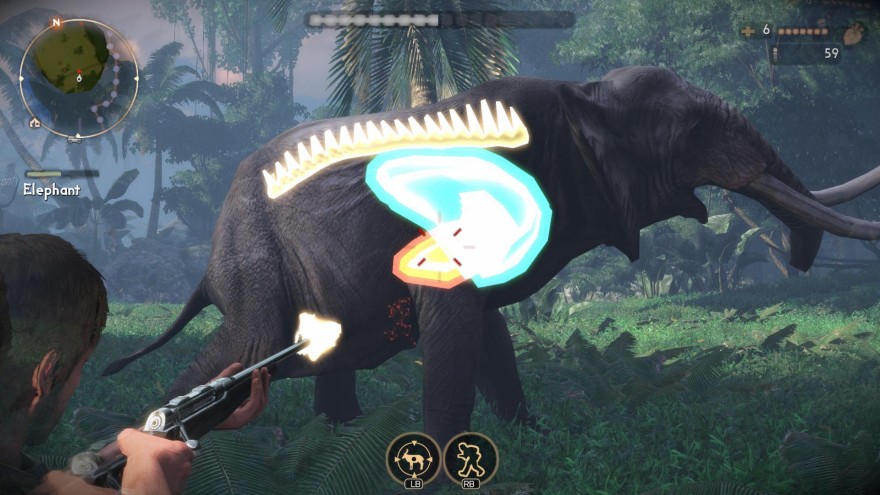 There aren’t many reviews written for new Cabela’s games. The brand has put out at least 22 hunting games since 2004, and the cycle of deer hunts, big game hunts, dangerous hunts, grand slam hunts, and hunting expeditions has exhausted everyone except a few cackling dudes on Youtube. In 2011, three Cabela’s titles were released on the same day. The games tumble out of studios in Eastern Europe two or three times a year, drawing little notice and less praise, so unconcerned with justifying their own existence that one suspects them as instruments in a tax scheme requiring investments in Romanian industry.

The big “annuals”—Call of Duty, Assassin’s Creed, Arkham, et al.— can afford to brush new paint over their disjointed frames each year, but Cabela’s games are made too hastily to cover their shame. In Cabela’s African Adventure, you can see the naked seam where the part lifted from Uncharted meets the bit from Metal Gear Solid, and where that’s joined to a ragged imitation of World of Warcraft. The game is less a hunting sim than an interactive indictment of its own production schedule.

Like Infinity Ward, developers Fun Labs recycled to save time: the baleful lion on the illustrated title screen looks like it could be the concept art for the animated one growling behind the menu of last year’s Dangerous Hunts 2013. The game’s hero, Mason, holds his rifle a bit less stiffly than the nameless hunter of African Safari, but he’s still chasing the “Big Five” trophy animals of that 2006 title.

After terminating all animal life in his designated hunt zone, Mason departs; he has no interest in pelts or meat.

Mason also inherits the ability to peer through animals’ skins and into their day-glo hearts, a power first granted to his franchise ancestors in the mistily rendered age of Big Game Hunter. Triggering his adrenalized slo-mo, Mason pumps bullet after bullet into sets of pulsing blue lungs, watching dispassionately as the tissue around them stamps and stutters and finally tips over rigid as a wooden buffalo. After terminating all animal life in his designated hunt zone, Mason departs; he has no interest in pelts or meat. His hyper-speed, X-ray eyes, and inhuman knack for reloading in mid-roll would be more at home in a game about cyborgs hunting radioactive mutants.

Mason’s actual story is nothing so romantic. The game’s title evokes virtual tourism, but its safari takes us through the least wild place on Earth: a walled and gated gaming Levittown of instanced missions, XP awards, loadouts, gun upgrades, and collectibles. There is no indigenous life in the grounds Mason stomps across, which have been compacted and sterilized into the purgatorial “zones” of an MMO. Our hero wanders the savanna, grassland, and jungle (as in Far Cry 2, they’re a short drive from each other), hunting the great white markers that take him to prefab missions. The continent that Edward Said once called a “privileged terrain” for the Western imagination has been appropriated with an indifference that is, at the least, a bit gross. Until the last seconds of the final cutscene, no black people appear in the game.

You see plenty of the game’s three white characters, who have the only speaking parts. Their workmanlike dialogue is heard through the in-game radio and during cutscenes that use marginally animated art, like Max Payne 2 or Peace Walker, but without the comic book trappings of speech bubbles, narration boxes, or a decent illustrator. They acquaint us with the protagonist Mason, who is a sort of budget-ravaged Nathan Drake, a copy of a copy of Indiana Jones that now looks like nothing but a faintly smirking ink blot. At the behest of an openly villainous man, Mason tracks down the scattered pieces of a golden statue, each of which is now in the possession of a boss animal.

Outside of the boss fights, there are only three missions in the game, and they’re repeated ad nauseam with different animals. The arena-style “survival” missions send you rolling around growling beasts before blasting them right in the glowers; the tailing missions leave you walking slowly behind prey while you play a different game on your smartphone. But the stealth sections in this game will haunt me. In these instant-fail gauntlets, gazelles and rhinos patrol their sectors as if they were posted at Shadow Moses Island, and the player can only roll meekly through the tall grasses behind them. The option to quietly snap a nyala’s neck or distract it with an erotic magazine would have gone a long way.

Herded by voices on the radio, hemmed in by conspicuous rock walls and his own lack of initiative, Mason doesn’t have much of an adventure. Neither do we, of course, but these days you can hardly expect one. Franchise games often work like African Adventures, hurrying you over the surface of the idea before you see that there’s nothing below your feet. Something like a new Arkham game is only an omnibus edition of devices that worked once before, or at least seemed to work, or at least seem easy to do again.

Play enough franchise games and you’ll find you’ve been following the same man for years and years. Sometimes you follow a secret agent or even a fucking gemsbok, but they’re no different. The tailing chore has never been fun, nor will it ever be, even if you follow the man through a landscape of exploding stars and pornography. It is always a waste of your time. They’ll tell you the man is in Africa, in Constantinople, in Rome, in Kingston. But it’s all the same place.