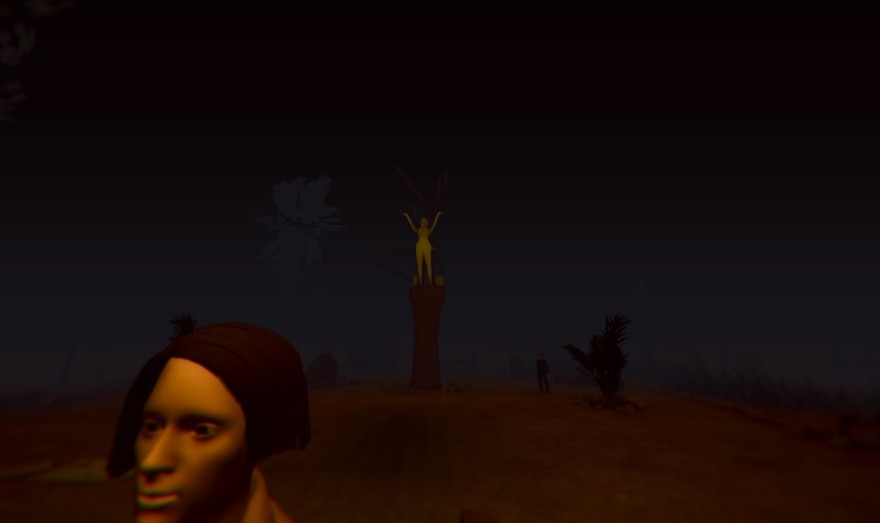 The desert suburb of , was founded by persecuted witches fleeing the Peruvian Inquisition.

At the entrance of this sleepy town stands the sculpture of a witch whose daughter and grandson still reside near the town’s center. She greets the occasional tourist with her hands stretched towards the azure skies in a powerful upright pose. Just beyond her are the seven “heads”: palm trees that coil back into the ground with a serpentine hook. According to local legend, if you cut off the heads of these trees, the town will enter an apocalypse.

practising fortune-telling inside a blue pyramid

It’s here that Aaron Oldenburg, a new media artist and Associate Professor of game design in University of Baltimore’s Simulation and Digital Entertainment program, travelled to out of fear he’d go docile without a project to work on while spending a month in Peru. He has an interest in “weird, sometimes failed colonies of people,” which has led him to do similar projects in Jonestown and New York—Towa Towa is a game he made based on the macho subculture of bird-racing communities in Queens.

In 2003, Oldenburg finished two years as an HIV Health Extension Agent for the Peace Corps in , West (he made a game about that, too), so he’s used to mixing in with the locals of small villages and towns. Without too much hassle, he arranged it with his “shitty Spanish” so he could stay with a brujo (sorcerer) called Don Miguel Angel during his weekend in Cachiche. Aside from being a traditional healer, conducting San Pedro ceremonies, and practising fortune-telling inside a blue pyramid, Don Miguel also owned a museum, restaurant, and a forthcoming hotel.

“He is an entrepreneur with big visions for turning Cachiche into a resort oasis like Huacachina,” Oldenburg said. “He’s also a really nice guy, gave me all my meals for free, and basically gave me a dusty room in the back of the restaurant to sleep in.”

Out of nervousness, Oldenburg had initially told Don Miguel that he was making a documentary, which probably coaxed some of his kindness—publicity means tourism. It wasn’t the whole truth, as the word “documentary” spoken alone still implies either a film or TV show to just about everyone. It took a while for Oldenburg to wean the brujo on the idea of an “interactive documentary,” and finally a “documentary game.” Oldenburg’s plan was to merge his interest in the town with his love of game design, and the documentary design process was the glue that stuck the two together.

“My major inspiration is Apichatpong Weerasethakul’s film Mysterious Object at Noon,” he said. “It’s a documentary where he went around to villages in and had people contribute to a surrealist exquisite corpse story. The movie is made up of those interviews, and he also has them act out parts of the narrative.”

The restaurant Oldenburg was staying in proved to be a good central hub of activity. When not out interviewing the locals and taking photographs of the desert’s structures, he would sit inside during the day and watch as the tourists moved in and out like the flow of the tide. At night, he spooked himself by wandering the eerily still rooms of the building as Don Miguel’s dog howled into the darkness. He was told that the door to his room didn’t have a lock but he could put a couch in front of it if necessary.

“At one point, Don Miguel had me get on his motorcycle and take a ride with him 10 or so miles out into the desert,” Oldenburg said. “He took me to this lagoon filled with trees and an old house on a hill. He said that this is where his spirit often goes when he’s ‘doubling’ (a sort of out-of-body experience, ‘desdoblarse’).”

Oldenburg was told that the house on the hill belonged to a friend of Don Miguel’s and was supposed to be a meditation retreat. Inside, it was obvious it had been completely gutted by vandals, “including the toilet and some of the walls being stolen.” Don Miguel’s dream was to have tourists transported on buggies back and forth from the town to the dunes. “The town’s still a long way from being overrun by tourism, though,” Oldenburg says.

there are no ghosts, but there will be plenty of things to take pictures of

It’s these sights and landmarks, that “are interesting in their mundanity,” that Oldenburg is currently turning into digital form. The lagoon—which is actually a drainage pond—the unrealized meditation center, the brujo’s restaurant, the witch statue, and the tree with seven heads will serve as locations for vignettes inside his game. “Playtesters were surprisingly interested in exploring the alleys between houses, so I’ve been putting characters and situations to eavesdrop on in those locations,” Oldenburg adds.

Dialogue in the game is taken directly from, or inspired by, the interviews that Oldenburg conducted in Cachiche. The ambient sound in the game is direct recordings from the suburb, the textures are all based on those in the photos Oldenburg took, and the characters he’s molding in MakeHuman are derived from real-life people he met.

Some divergence in this diegetic accuracy appears in the in-game town’s layout as it’s not “house-for-house,” but photos and Google Earth are being consulted to get a rough spatial translation. The reason for this meticulous recreation is not only so the feel of Cachiche can be experienced, if only tenuously, but because the town “looks so much more random and organic” in reality than it would if Oldenburg were to attempt a random layout of his own originality.

The idea of the game—called simply “Cachiche“—is for you to explore the Peruvian desert at night with a camera after being drawn to the town on the promise of ghost sightings. You’ll wander the town and will have to travel to further locations, as Oldenburg did, with a motorcycle or taxi. It turns out that there are no ghosts, but there will be plenty of things to take pictures of, and interesting encounters can be had with characters you meet who will tell you stories based on the photos you take.

“They tell you stories about these pictures, either real or imagined, about the specific location or non-sequiturs,” Oldenburg said. “It becomes a sort of conversation mechanic: if you want to discuss something or get people’s reaction to a subject, you take a picture.”

This mixture of documentary and fiction is taken directly from Mysterious Object at . Oldenburg thinks of the technique as bringing out the “participants’ imaginations and collective unconscious,” which he reckons is probably more revealing than more straightforward documentaries. However, due to his heavy use of fiction in his digital version of Cachiche, Oldenburg can’t call his game a documentary, “although you could say that it’s getting at the Herzogian ‘ecstatic truth’,” he tells me.

Keep up with Cachiche on its website. It is also currently on Greenlight Concepts. Oldenburg expects Cachiche to be finished by June 2015.