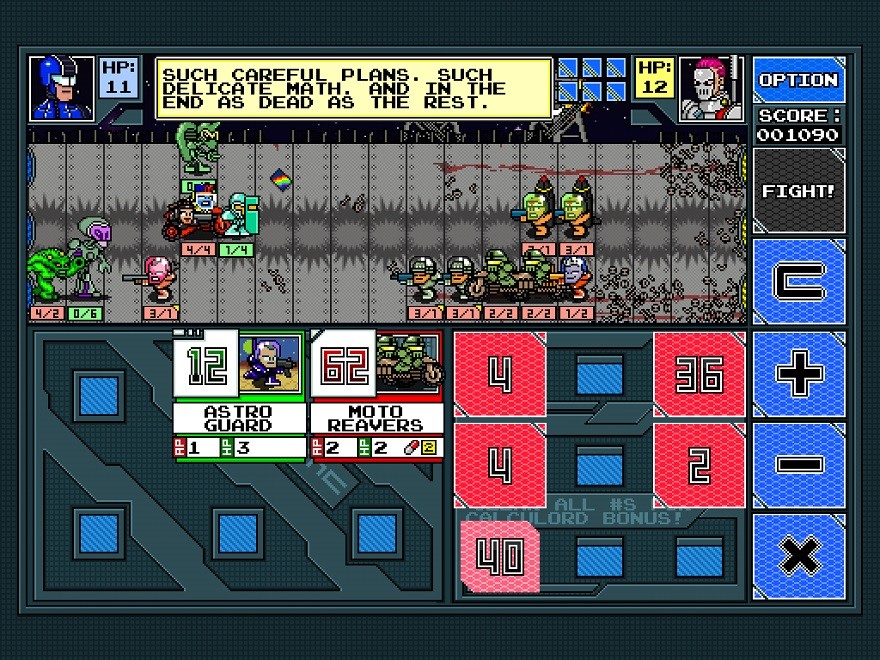 I’m not what anyone should ever call a “mathematician.” Do not depend on me to calculate the tip or deduce the best way we divvy the cash in our pockets to split the bill. My parents employed armadas of after-school tutors to help me score a pass. Part of why you’re reading this is because, while my math and science skills never took, I did win a playwriting award from Sears in my final year of high school. Two things I’m hopefully competent at are games and writing about them; so now you know.

And yet, here comes Calculords, a videogame that has made me feel like a math hero of the universe.

Calculords, a new card battle game by EGM old-schooler Seanbaby, is all about the numbers. Many turn-based games are hinged on mathematics, but they’re rarely so explicit about it – or so rewarding. In the depths of the cosmos, you fling galactic troopers, robots and mechs against each other, as long as you manage the resources properly. And while, in most games, resources manifest as magic, runes, or sci-fi crude oil macguffins, Calculords’s resources are numbers. Or at least the sums of them.

To best your rival space warlord, you need your troops to breach the opposite side of a battlefield, which can be done with green units (who push back) and red units (that usually have buffed offense). Some can cover more distance in a single turn, some fire from the hip the moment they’re placed, some are straight-up saboteurs. There’s a great variety of soldiers that can sacrifice themselves in the name of numerals. Where Calculords is very, very different is not the arsenal, but how you deploy it.

Each unit and modifier is coupled with a number, and in order to activate them, you must create that number by maneuvering a random assortment of digits. At your disposal: addition, subtraction, multiplication. Not division, which is either a strategic design choice or a Simpsons reference. The more valuable a card in the fight, the more awkward, larger, odder, non-multiple of five its number value.

There is great pleasure in the acrobatics required to reach certain numeral destinations. Solidifying your extended timetables to see all the plausible routes. Creating a difference specifically to chip at another sum. One of the game’s most exciting mechanics (yes, exciting) is that you can steal a second turn by using every number given to you. There should be no shame in hiding that “1” under the rug by just multiplying it. All’s fair in love and war.

I wouldn’t say I’m learning from Calculords, but I am having fun

This isn’t “edutainment” per se, but it does envelope class-hour lessons in a way that’s more engaging than Sticky Bear could muster. No kid ever got excited about Mario Teaches Typing because it was the promise of playing Super Mario in class betrayed by the fact that it was incredibly boring. I wouldn’t say I’m learning from Calculords, but I am having fun and I at last feel more confident in my relationship with numbers—a stark departure from when someone asked me a casual equation and I shot them a look like they just asked me to deactivate a bomb.

There comes, then, a question of difficulty. There are only a handful of opponents and they reuse their strategies, although more aggressively when revisited on higher levels. You do unlock new cards for rerun victories, but it would also be nice to be forced to reassess strategies as well. But perhaps it’s all too easy to—perhaps it’s all just me? Maybe I’m a dummy. Maybe those who actually have a knack for math won’t find Calculords as enchanting, something they’ll just bowl over. Calculords doesn’t punish you for dicking around with the equations indefinitely. But, for the first time, I’m enjoying equations, and whoever is responsible for that has performed some degree of math magic.