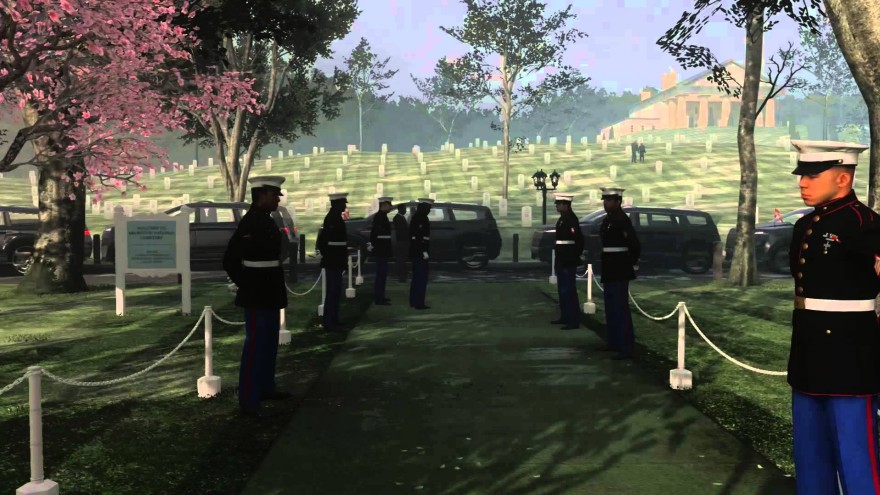 Early in Call of Duty: Advanced Warfare, the player character’s best friend dies. It’s meant to be a poignant moment, but this death comes so soon after the friend’s introduction that it doesn’t have much emotional impact. It initially seems that, like every Call of Duty from 2007’s Modern Warfare onward, Advanced Warfare isn’t planning to wring any pathos from the constant death and destruction that makes up its single-player campaign. But, surprisingly, the following chapter opens with a detailed depiction of the dead friend’s body being cleaned by a mortician. Stiff fingers are wiped clean of dirt. A wedding ring lies in a wet splash of blood. Cutaway to his funeral. Friends and family cry. They wear black and listen to a soldier in full formal dress speak a eulogy. None of it carries a lot of weight—especially not the inherent gaminess of the player being prompted to press the square button over the casket to pay respects to the dead—but it’s something more than the straightforward carnage that has come to define the series over the past few years.

Call of Duty protagonists have always been a bit like superheroes. Outside of dramatic cutscenes, they survive explosions, recover from gunshots by crouching behind cover, and shake off brief maulings by attack dogs. Advanced Warfare takes this series’ tendency to its natural next step by setting itself in the near future (the 2050s) and draping the majority of its characters in robotic “Exoskeleton” suits capable of augmenting their strength and survivability. The player, as Jack Mitchell, a former Marine turned employee of fictional private military contractor Atlas Corporation, can hit a button to recover health faster, double-jump over obstacles, or activate an invisibility cloak. What this means as far as what you actually spend your time doing in the game is that Advanced Warfare’s combat is more frenetic than that of its predecessors; its battles allow for tactical possibilities beyond the usual run-shoot-cover-and-shoot loop. On a larger, narrative scale, the Exo-Suit’s superpowers provide the game with ample opportunity to highlight the already uneven power balance between soldier and civilian. They also remind players that when war isn’t about cool explosions and flashy weaponry, it’s mostly about death.

Plenty of Call of Duty games have sanitized their battlefields by clearing them of all non-combat personnel. Barring sequences explicitly designed to quickly villainize an enemy force (like, say, the airport slaughter from Modern Warfare 2), the series usually sees civilians fleeing the area before any real fighting breaks out. In contrast, an Advanced Warfare mission set in Lagos, Nigeria tasks the player with having to avoid shooting through crowds of ordinary people as s/he pursues enemy forces. Another takes place in a crowded Grecian marketplace. The civilians, running around frantically in regular old jeans and shirts, are caught out in their daily lives, forced to seek whatever shelter they can amidst the chaos of a gun battle. Accidentally (or intentionally, I guess) shoot one of the people stuck in the crossfire and the game stops to reload from the last checkpoint. It’s the same as what happens when the player is killed.

There’s a kind of reflection taking place throughout Advanced Warfare that’s more and more clear with every civilian-packed level. Amidst the technological fetishism of the game’s robot suited soldiers, headshot-tracking statistics, and the abattoir of each level’s running gunfights, there always seems to be space for the less flashy—less fun?—parts of war. Armed with an Exo-Suit kitted out to make indiscriminate destruction more enjoyable than ever before, the game urges restraint. Death and its accompanying despair, as the opening funeral scene establishes, is a constant possibility if the wrong target is shot. Jack Mitchell and his supersoldier squad can leap over crashed buses on the Golden Gate Bridge stage and sight targets with an infrared, holo-scoped rifle, but they must always be aware of the panicked civilians running from the violence being meted out by opposing forces of techno-god combatants.

Despite the gleaming science fiction textures of Advanced Warfare’s shiny future guns and cool, glowing lights of each level’s ever-present computer terminals, there is plenty of grime to be found throughout the game’s environments. Outside the confines of a sterile military facility in Detroit, frightened refugees huddle in the rain and mud of a hastily assembled shelter; just beyond the sleek hologram billboards and glassy skyscrapers of New Baghdad is a squalid prison camp where war prisoners are kept in brutal conditions reminiscent of a high-tech Abu Ghraib. And there’s the fact that just as much obsessive detail has gone into rendering Kevin Spacey’s likeness as the blood rushing out of a wounded character’s gut as he dies slowly in the back of a truck. All of it adds up to make the most aesthetically mechanical Call of Duty to date also, surprisingly, the most conscious of war’s humanity.

This isn’t to say that everything about Advanced Warfare transcends the kind of videogame players expect from a mainstream shooter. There are plenty of times when the plot finds ways to take the governor off and give Mitchell’s team no objective other than to mow down enemies in a setting free of any potentially innocent outsiders. And, of course, there’s the multiplayer component that, for plenty of people, will be far more representative of the game than its story campaign. Here, introspection gives way to the endless slaughter that comes with unlocking new weapons, levelling up a character, and finding a nice balance for the player’s kill/death ratio. As welcome as the change-up that comes from using the Exo-Suit’s abilities to compete against human-controlled enemies is (and it really is), the multiplayer’s existence comes off as a refutation of what the game wants to say about the gravity of war. One large part of Advanced Warfare’s whole  is Call of Duty’s typical, lizard brain-scratching cycle—shoot before getting shot; kill, motherfucker, kill, kill, kill—but another asks for rational thinking: shoot before getting shot; don’t hit that guy in the golf shirt!

This is Call of Duty coming to terms with itself—pushing and pulling between social responsibility and the joy of instinctual, itchy trigger-fingered chaos. Not since Modern Warfare has an entry to the series felt much more than casually disinterested in humanity. There’s no way to take back what it has said in the past—its trivialization of history with Black Ops and shift toward jingoistic chest-thumping in Modern Warfare 2 and 3—but in Advanced Warfare’s recognition of death as a by-product of war there is a chance for a new way forward.