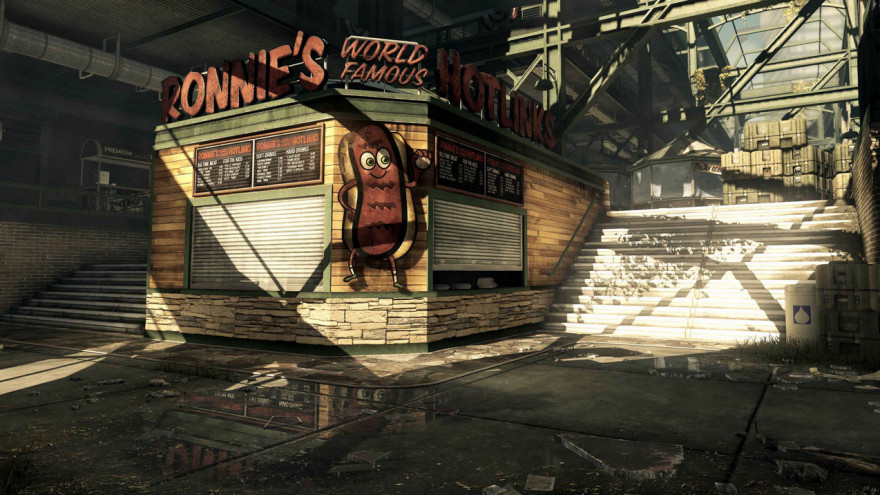 Call of Duty: Ghosts is a game about a great shift of superpowers, from the United States to South America, as if the political poles of the earth were turned upside down.

There’s no point in detailing Ghosts’ plot because Infinity Ward didn’t put much work into writing it, but the loose premise is that, after “the great energy-producing deserts were destroyed,” our enemies regrouped in South America to form The Federation. This Federation, whose intentions are not explained and hence isn’t properly vilified, opens the game by hijacking US orbital weapons, which it then uses against us, obliterating large swaths of the country, bringing it to its knees. A crucial detail our rugged narrator explains is that the US was weak, far less powerful than The Federation, years before the attack.

There’s no point in detailing Ghosts’ plot because Infinity Ward didn’t put much work into writing it.

Imagining the destruction of American cities, landscapes and monuments is nothing new. It’s been the crux of three previous Call of Duty games. Ghosts is conceptually different in that it imagines waning American power not as the result of some great calamity, but as a natural decline. Yes, there is also a calamity with big explosions, crumbling buildings and the earth splitting and yawning beneath our feet—sure—but Ghosts makes a point out of mentioning that this was only kicking us when we were already down.

When New York or L.A. were endangered in previous Call of Duty games it was only because a clever villain managed to fool us, to take advantage of our noble nature, to use the giant’s weight against him. The superiority of our military, culture etc. was never questioned, only briefly outwitted.

Ghosts begins with us already having been defeated. We don’t play a part in defending Las Vegas against invaders, we only see it after the fact, the once-glamorous casinos slowly reclaimed by the sand. We don’t have a chance to repel an attack on LA (at once our cultural goldmine and void); it’s already been reduced to a crater. More importantly, we get to see that, meanwhile, the enemy is celebrating Federation Day with colorful fireworks over Caracas. We get to see the lights exploding and reflecting in the glass high rises that sprouted from its newfound wealth.

The people of Caracas and The Federation sounded pretty happy and innocent in the streets below, so I wasn’t sure how I felt about me and my badass bros (two are literally brothers) wreaking havoc on their city.

I thought about my titular squad of Ghosts, elusive and deadly, known for their fanaticism and willingness to die in the name of the cause. We were like a cult, and, while in Caracas, essentially terrorists.

The fantasy of Americans as freedom fighters isn’t new either. I’m very fond of Red Dawn’s Wolverines and less so of Homefront, which tried to make a Call of Duty game out of the same movie. But defending the homestead is one thing, taking the fight out of the country and into a foreign, peaceful city is a completely different matter.

Ghosts takes a Call of Duty player, creates a fiction around him where America is put in the position of many of the countries we fight today (weaker than us, defeated from the sky), and allows him to become what we fear. Given the right conditions, maybe he’ll suddenly find himself empathizing with the enemy whose point of view we rarely consider. What better way for a game to engage with and comment on war without coming off as jingoistic?

Call of Duty has always been best when it attempted to allow you to experience horror.

To fully understand Ghosts’ other big subversive moment you have to go back to the moment that defined Call of Duty: the beach landing in Normandy from Medal of Honor: Allied Assault (2002), which was created by the team that later became Infinity Ward. But in order to understand Medal of Honor you first have to go back to Saving Private Ryan (1998) and Steven Spielberg, who “helped to write” that game.

Much like his death camp and ghetto scenes in Schindler’s List, Spielberg’s Normandy was remarkable in its ability to make us feel close to actual horrors from history. For 40 (30? 20? felt like 40) relentless minutes of Saving Private Ryan he tortured us with whizzing bullets, explosions like the wrath of god, and the viscera of very young men. As always, he can’t help himself and resorts to schmaltz—snipers reciting verses from the bible while reloading, Tom Hanks’ innocent face—but for the most part he astounds us with how monstrous people can be to one another. You sit there and watch and remind yourself, This actually happened, people did this.

The beach landing in Medal of Honor was remarkable because it accomplished something similar in the form of a first person shooter. It also had the added value of allowing you to die over and over again. It was a very hard level in its original form and realistic for the time, and while it surely looks silly by today’s standards, it was hugely effective because it also made you think, this actually happened. It was very difficult; suicidal, even, as the repeated deaths make clear. They must have been terrified, the people actually storming those bunkers. Given the amount of times I had to restart this level, I probably would have been the first to die if I was there.

Call of Duty has always been best when it tried to accomplish something like this: when it attempted to allow you to experience horror by subverting what we expect from a first person shooter. The battle for Stalingrad, which sent you into the fray without a weapon, is another good example. Call of Duty 4: Modern Warfare, which launched the series into the stratosphere and largely defined the entire genre for this generation, had a few of these moments, including one where the player is publically executed without ever getting the chance to defend himself, and another where he’s unceremoniously extinguished by a nuclear explosion. Modern Warfare 2 flirts with terrorism and subverts the genre by asking you to shoot civilians in the infamous No Russian scene, begging the question: what’s the point of a shooter where nobody shoots back?

As part of its incessant attempts to shuffle you through the game, Call of Duty loves barking orders at you. “Head to the parking garage!” “Man that machine gun!” “Use the computer!” In the mission I am thinking of the order was to “Go to the command center and save your father!” The command center and your father are both at the Santa Monica pier in California, which has been converted to a makeshift naval base. As you arrive, so do The Federation, in an attempt to wipe out the American stronghold.

You might as well be shooting at Tom Hanks or yourself from Medal of Honor circa 2002.

At some point you man a machine gun from an advantageous position and shoot at The Federation soldiers as they land on and storm the beach ahead of you. The weapons are a little more deadly, the hovercrafts are more sophisticated than the Allied landing crafts, but you might as well be shooting at Tom Hanks or yourself from Medal of Honor circa 2002. It’s the same battle from the opposite point of view.

The fact that the nature of the conflict between the United States and The Federation is never explained also means that, like Germany, it’s entirely possible that we deserve to be invaded. The destructive orbital weapons in the sky were ours first. The Ghosts are the ones that overstep their boundaries, acting violently beyond their borders. It’s more likely that these “great energy-producing deserts” (i.e., The Middle East) were destroyed by us, not Venezuela. Ghosts’ fictional history is conveniently vague about this, and the fact that the goal of that mission is to save you father and your land, to save your father’s land… well, just put the words together. Maybe the US is secretly the evil empire in Call of Duty: Ghosts, but if that’s the case the point is that it doesn’t seem evil when it’s our father and our land.