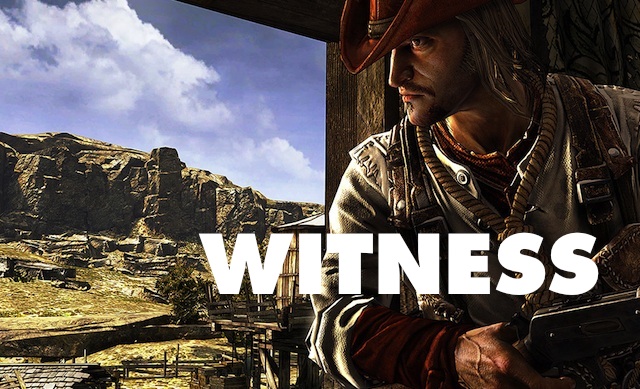 Though the rants of old men are long-winded and crude, they’re not necessarily a bad thing. It has been proven time and again that they can carry a work of popular entertainment. Consider the evidence. At 172 minutes, the director’s cut of Terrence Malick’s The New World rattles on interminably, but it will leave you breathless. On literature, the novel Carpenter’s Gothic, written by an aged and rather cranky William Gaddis, is excellent, and it’s told almost exclusively through the rambling blusters of a discharged soldier and a retired geologist. And even though the grizzled narrator in Call of Duty: Black Ops 2 has a worse attitude than Nick Nolte on a losing streak, you almost grow to respect him.

Old age is more likely to give you the gift of gab.

Similarly, Call of Juarez: Gunslinger, the enjoyable downloadable shooter from the Polish-based Techland, understands that old age is more likely to give you the gift of gab than anything resembling wisdom. Its shootouts and stage pieces are dictated by a garrulous cowboy spinning yarn about the glory days over rounds of rotgut at an old-timey saloon. (It should be mentioned that when an outfit of game developers from the Baltic coast can deadpan the mystique of the American cowboy, as established by the likes of John Wayne and Clint Eastwood, it’s understandable why we don’t see that many Westerns these days. They’re tapped.)

The heroic and predictable accounts of our drunken, wistful cowboy could be plucked from any number of Western films. That’s because his stories don’t add up, as he mercilessly brags of having a hand in every major heist and showdown in the West. At the end of the day, he’s just glad to have someone to talk to. This is true to life. Being privy to conversation with more than a few septuagenarians, I can tell you our unreliable hero’s colossal tales aren’t very far removed from the usual topics: barroom fisticuffs, train-hopping, homemade whisky, renowned card-sharks, under-the-table gambling at the fish market, the occasional stickup.

Here’s a gun. You’re a cowboy. Shoot something.

These stories typically come with a wink and a nudge, and, given the cumulative age of the interlocutors, their accuracy is already in question. This unrestrained act of bullshitting, as John Walker of Rock, Paper, Shotgun rightly points out, can be a clever way to skirt around the problem with shooter narratives–namely how the game requires you to shoot so many hombres that, by the end of the first chapter, the main character is not only a psychopathic killer; he’s Ulysses. But because the game takes place in the flashbacks of an outlaw who’s trying to impress whippersnappers and a barkeep, you’re already expecting these incredible feats of marksmanship to be big fish stories.

While personally I refrain from the ritual of bluffing, I’ll confess that in other ways modern shooters make me feel like a ranting grandpapa. Thankfully, Call of Juarez assuages my occasional gall towards the way the genre has evolved. My first shooter was Hogan’s Alley for the NES in ‘85, a zapper game where you pointed a plastic barrel at the TV and pulled the trigger. The objective in its entirety was to blast targets that looked like Rambo in a fedora.

Likewise, Call of Juarez is all about aiming and shooting. There are no gripping existential choices that have no right answer, no self-righteous undertones that awkwardly address a social issue, and, because our chit-chatty narrator is talking in voiceovers, there’s no stopping to listen to exposition that frankly I don’t give a damn about. The through line amounts to: Here’s a gun. You’re a cowboy. Shoot something. In the movies, we demand that cowboys have grit, show resolve, and are out to get the scurvy bastards, but because the essence of videogames is interaction, good gunplay is justification in itself. The cowboy traits have become tropes anyway.

There are no gripping existential choices that have no right answer, no self-righteous undertones that awkwardly address a social issue.

At this point, if you’re holding a gun in first-person, then some semblance of multiplayer is a must, and for those seeking outlaw justice on the internet, Call of Juarez may be lacking. But I couldn’t be happier with what we get in exchange. Instead of death match, it has pistol duels, in which my weathered outlander tries to draw and fire quicker than the crooked sheriffs he’s faced up against. There’s also a gratifyingly furious leaderboard mode where you can keep your combo going by shooting bottles and cans.

Besides, my middle-aged reflexes simply can’t keep up with those of a rabid online community who cut their teeth on the original Halo and have been honing their skills on upgraded versions of essentially the same game for over a decade. I don’t have the requisite forty to sixty hours to invest to get up to speed. Why try even?

Now, shooting bottles and cans—if that isn’t an activity fit for us gaming old men, I don’t know what is.