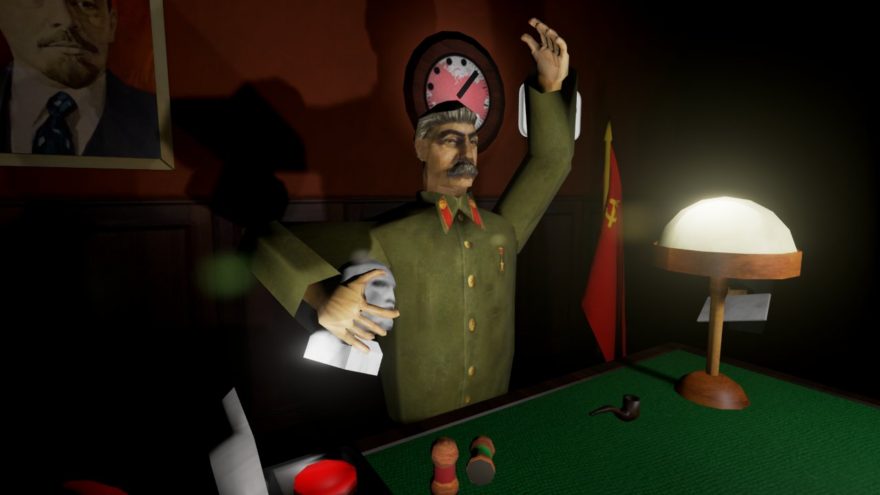 The Cold War was as much a war of personality as it was a war between nations. For more than 60 years, everyday tensions for U.S. and Soviet leaders risked boiling over into nuclear war. It took hordes of advisors on both sides to talk down leaders like Reagan and Gorbachev when faulty intel or empty threats threatened to wipe humanity off the map. In hindsight, it was as much coddling as it was diplomacy.

Calm Down, Stalin is a darkly humorous look at just how close humanity can get to offing itself. Quite literally, your only job is to calm down Josef Stalin. That seems pretty simple until you realize Josef Stalin, level 1 boss of the Cold War, was a famously hotheaded genocidal dictator.

as much coddling as it was diplomacy

Calm Down, Stalin plays with all the fun and grace of its namesake. That is to say: it doesn’t. A balancing act of mundane tasks—like answering the phone and flipping a light switch—alter three stats: tiredness, integrity, and progress. All the while, Stalin’s hand hovers over “the big red button” that controls the nukes. It’s necessary to use this threat to turn back time on the doomsday clock that hovers menacingly over your shoulder. Unsurprisingly, if you actually press the button, you lose.

Fitting in smoke breaks and vodka shots becomes increasingly difficult as more and more tasks are added to patch together Stalin’s sanity. It’s comforting to see that, like real politics, alcoholism and nicotine addiction are just as essential as diplomacy to maintaining world order.

I suppose that, if you’ve ever wanted to be a hero, Calm Down, Stalin is the game for you. To be clear, I mean hero in the martyrdom sense—no one will remember your name. The point is, like all those nameless aides who have advised world leaders against nuclear war, you’ll pull the strings. You’ll keep humanity alive, and receive absolutely no credit for it. All in a day’s work, I guess.

You can purchase Calm Down, Stalin on Steam.