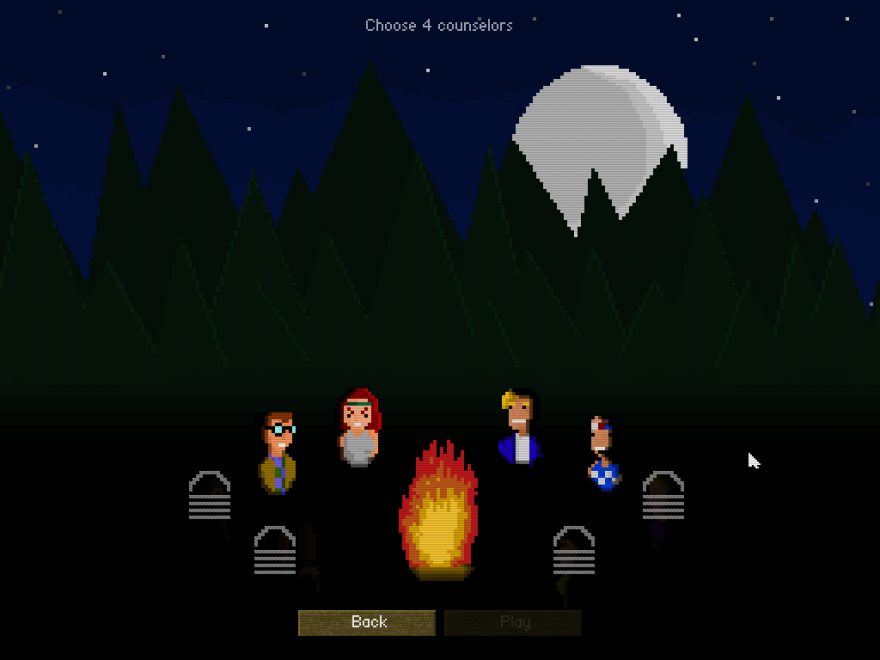 Horror films have never translated very well into videogames. There are, we both know, astounding, chilling horror survival games, but they aren’t referenced material. The games based on slasher, shocker, gore-hound horror films typically stick to microwaving their source’s tropes and serving back them to you. Be it an 8-bit Krueger claw-bouncing around as an end boss or having to solve the Jigsaw Killer’s nefarious image-pairing puzzles, the things that shock us in the cinema don’t seem to translate into a game’s design. We end up with absurd clichés that remind us how dumb horror films can be—and it’s these very clichés that Camp Keepalive uses intentionally.

It’s shlock tradition to scream at the screen as the erstwhile heroes tiptoe cautiously into the very back-room where the killer lurks. When it’s in a film, the joy comes from a sort of schadenfreude; we cringe but we also get to see some the demise of some smug prankster yuppie or, worse, Matthew Lillard. When it’s a game, however, it’s you, and the determination to live is shared by the audience; it’s a death that will repeat for every continue.

One game which forcefully plunged you into the uncertain was Atlus’s historically bad Friday the 13th for the NES. You played as a camp counselor forced to rescue children in cabins across the haunted grounds. Occasionally you’d encounter the lurching Jason, but more often it’d be wolves who got in your way as you inspected cabins and bee-lined across the forest. Keepalive seems to be an adaptation of that adaptation, but creates a method of play which not only makes sense of implausible bravery, but also makes it fun.

A blend of turn-based tabletop-style play and tower defense, Camp Keepalive drops you into the shoes of four spry teenage camp counselors who have to shepherd endless flocks of glossy-eyed, blue-shirted children to shelter. Sludge monsters, evil clowns, axe murderers, chainsaw murderers, big bats and (yes) wolves vie to intercept them. But the odds here are more in the favor of human life than they would be in a movie; nobody seems to be moving with much intent. Kids sometimes step right up to monsters, and monsters sometimes shy away.

This is exactly why horror-film games suck; they stick to what’s known.

For that matter, your ensemble of stereotypical teenagers have quite a bit going for them. The trench-coat dweeb can hold more traps before restocking at the cabin, for example; the tomboy babe can slay monsters on her own with a bow and arrow, assuming she pounces first. You can control your fate, which is more than you can say about the early horror games to which Camp Keepalive pays homage.

We watch cheesy b-movies for death and we play games to live. With self-conscious thrillers like Cabin in the Woods continuing to trickle into theaters, it’s clear that schlock cinema continues to look good in the rear view mirror, with each new iteration poking fun at the mores of the previous one. And this is exactly why horror-film games suck; they stick to what’s known. They play like garbage instead of playing with garbage.

So, while Camp Keepalive’s objectives draw inspiration from Friday the 13th, it owes its greatest debt to Maniac Mansion. Like Cabin in the Woods, Evil Dead II, Return of the Living Dead, Slither, or anything from the chum-bucket of Troma, this game delights us not because it preys on teens but on clichés.