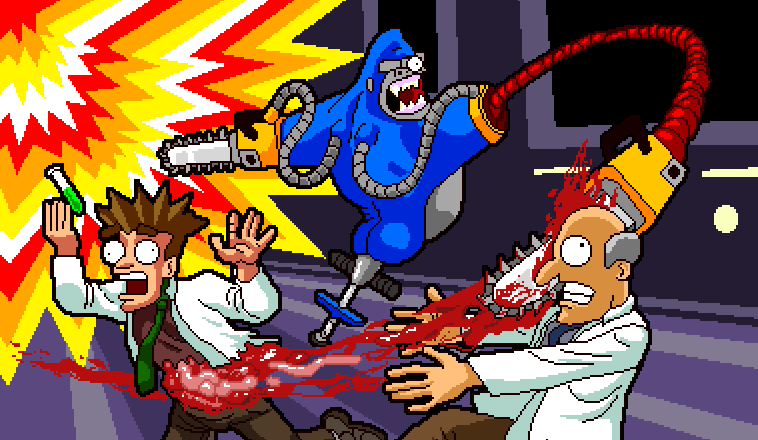 What do you expect?

When you snatch a booger-picking gorilla out of the jungle, chop off its limbs, and then replace the arms with chainsaws, and the legs with a pogo stick—what do you expect? A murderous rampage is just a matter of course at that point.

It feels like animals have been imprisoned by corrupt corporations in videogames forever. It’s been happening even before Sonic the Hedgehog used his speedy boots and spiny blue back to quell the animal fetish of Dr. Robotnik.

Bionic Chainsaw Pogo Gorilla just ramps up the camp with joyful gory genocide. It’s a whirring blender of retro game sentiments and pixelated violence: penguins with gatling-gun bellies, bulldozer brain-sharks, and sliced-up scientists. Your mission? To climb up the scientists’ corporate hideout and exact revenge on a red-faced fat guy that laughs merrily at all the chaos.

Then there are the bosses. You’ll have to look out for the weak points on a snowman that morphs into a blizzard giant, an ivy plant that’ll swallow you whole, and a pink platypus that farts explosives. Nothing in the game is subtle in the slightest. It’s loud, it shouts, and it cares for nothing other than being as ridiculous as possible.

Just take a look at the body part customizations you can swap your gorilla for. Fancy a tyrannosaurus head, glazed donut middle, and a rainbow slinky as legs? You’ve got it. You can trade the chainsaws for vines, lightsabers, glow sticks, and plenty more, too.

The game is strongest in the beginning, while it’s still fresh and surprising. As you get used to the boing-boing of the gorilla, wildly spinning your chainsaw arms around, and occasionally flinging them out on bloody tendons for a ranged attack, it feels like bottled-up chaos. Levels are designed to promote fast-paced runs, which is why so many of the obstacles are intended to slow progression: slow-moving elevators, platforming sections above lava and spike pits.

Even the power-ups aim for inanity. They come in two forms: green for positive, red for negative. The positive power-ups will give you invincibility, super jumps, even Mega Saw arms that would fit perfectly in a Photoshopped ad for muscle pills. But it’s the negative power-ups that show Bionic Chainsaw Pogo Gorilla at its goofy best. You don’t just take damage to your health bar; a dragon’s head lurches in from the corner of the screen to breathe harmful rainbow lasers at you. Now that’s worth taking a hit for.