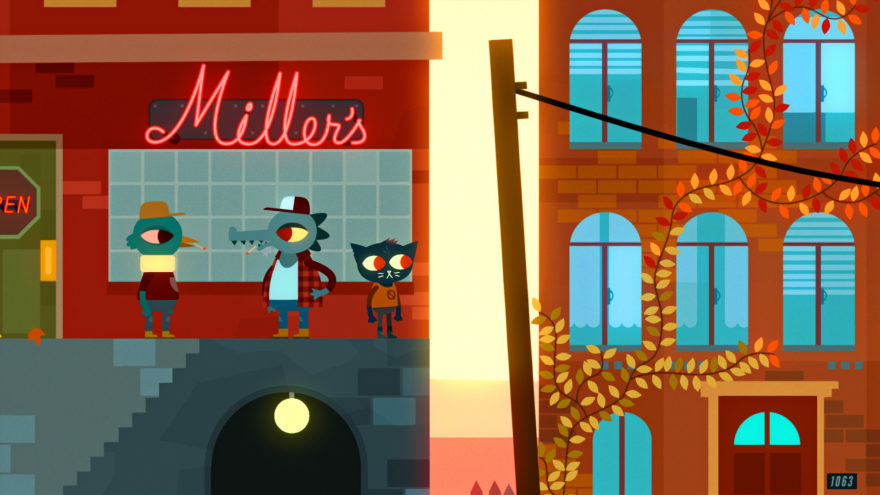 I’ve spent many months thinking about what my New Year’s Resolution will be as we transition into 2017, and I’ve decided: I’ll live life more like a cat. I’ll prowl human legs, mewling for tuna, and scratch leather sofas to prime my claws. But, mostly, I’ll chill out and do a whole lot more sleeping. This ambition of mine has just been made much easier with the news that, after three years of work, Night in the Woods is coming out on January 10th 2017 for Windows, Mac, Linux, and PlayStation 4.

In it, you play as Mae Borowksi as she returns home to Possum Springs, looking to “resume her previous life of aimless hanging out and petty crimes.” Mae is a cat. But not in the Catlateral Damage sense—in which you wreck shit from the perspective of an enraged house cat—rather, Mae is much more human; a typical post-teen, small-town resident in search of a path in life. Her friends are similarly anthropomorphic (a bear, a fox, a croc), but they’re more grown up than when she left Possum Springs, so in the game we’ll see her trying to get used to that.

As you might gather, Night in the Woods focuses on dialogue and storytelling than most other things. This is something that can be gleaned by playing Lost Constellation, made by the same team and presented last year as a “folktale from the world of Night in the Woods.” Sure, Night in the Woods will have “jumping between buildings, feeding rats, and smashing lightbulbs behind the convenience store,” but it’s a game that wants to be identified more for the thoughts it provokes than the verbs it uses.

But that’s not all. The title, Night in the Woods, refers to a stranger conspiracy that’ll unravel as the game does. We’re told that “strange things start to happen,” a tease that culminates in there being something to discover in the woods. So while life and melancholy brushes up against Mae’s fur, she and her friends will also be faced with the prospective of the supernatural—whether in their imagination or not—as they chase their curiosities between the trees.

At least, that seems to be one version of the game’s events. The news released today adds that you have some choice as to how you have Mae spend her time in Possum Springs, and that determines what things she ends up doing and who she meets. You’ll have to play through the game more than once to see everything.

That should be enough intrigue for now. A new trailer for Night in the Woods is apparently on its way between now and the game’s arrival, so look out for that. I just have one more question: why does that owl in the announcement image above have antlers?

You can find out more about Night in the Woods over on its website.