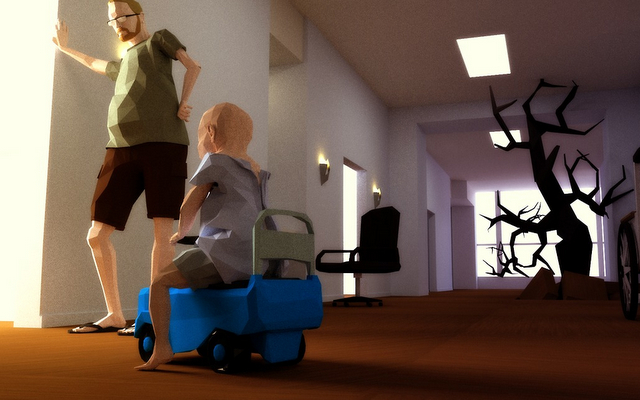 We all have problems. For instance: I’m covering the 9th annual Games for Health conference in Boston, and I’m having trouble talking to strangers. Zoom out and this is inconsequential, a momentary lapse in societal norms. Zoom in, though, and this mild anxiety negatively impacts my job, such that others relying on me will be disappointed, or certain opportunities will pass me by. Once engaged, I’m a regular Lothario; it’s the instigation that’s difficult. Had a cute girl not told me on one fateful Summer Solstice night six years ago, “meet me in my room in five minutes,” I doubt we’d be married today. But that’s a once-in-a-lifetimer. I need something else and my Rx quota is all tapped out.

Digital entertainment can be a form of relief from our daily aggravations, something else to focus on. But what if they actively addressed these problems? What if they could outright solve them? Ben Sawyer began the Games for Health project with this goal in mind; nearly a decade later, they’re making progress. From what I saw at the Back Bay Events Center near Copley Plaza, certain types of problems are easier to address than others.

Games do macro well. Notable examples include FoldIt, the crowdsourced puzzle game that’s been using human spatial awareness since 2008 to accumulate data on amino acids and proteins–all by giving players a simple online game to play. During Miguel Luengo-Oroz’s presentation on his Malaria Spot game, which hopes to similarly tap into the masses to help locate parasites in images of blood samples, he noted the success of Galaxy Zoo, one project from the Citizen Science Alliance which has enabled a random cast of thousands to do the work of dedicated specialists–in this case, classifying galaxies from Hubble images–and to do so at exponentially faster rates. In the first months of Zoo, their participants’ work equaled that of a single scientist working for over one hundred years.

In the first months of Zoo, their participants’ work equaled that of a single scientist working for over one hundred years.

At the micro level, though, the usefulness of games is up for debate. Dov Jacobson showed Brush-Off, “the experimental toothbrushing videogame.” A simple interface shows which foods promote more or less tooth decay, along with the ideal times of day to brush. I’m not the target audience of Children Aged 5-6, but I question the efficacy of a computer game drilling the necessary habit into their schedules. Zamzee is a FitBand for kiddies, a wearable USB drive you plug into your PC after a day of rabble-rousing; it gives points for being active, though you unlock nothing to play with mouse-in-hand: the activity itself is the game.

Seems to me two main categories of Games for Health arise: Those that help us want to do what we already can; and those that give us the ability to do what we can not. Luengo-Oroz’s Malaria Spot will harness a population of laypeople to combat a disease with over 250 million cases worldwide that, otherwise, they’d be helpless to aid. Little Susie can brush her teeth just fine without Brush-Off. Whether she wants to or not is the issue.

And then there are those games that help us cope. Sawyer highlighted two such games in his keynote speech, “Indie Game Health.” Depression Quest by Zoe Quinn is an “interactive (non) fiction” that illustrates everyday situations and how one with depression may struggle to overcome obstacles that to others may seem simple. The goal is awareness, not necessarily a solution to what is a very personal, complicated, multifaceted problem. Quinn writes also that by playing, “other sufferers will come to know that they aren’t alone, and hopefully derive some measure of comfort from that.” The potential audience is enormous, with one in every five Americans said to suffer from some level of behavior-changing anxiety.

The players shares in the pain, and by doing so abdicates their own.

Then Sawyer introduced Ryan Green to the stage. His adventure game That Dragon, Cancer is a startling paeon to hope in the face of tragedy. The game sets you in a first-person environment, taking the role of a father dealing with his son’s terminal diagnosis. Scenes are based on Green’s real-life story, one whose ending has yet to be written; his son Joel has survived three arduous years of treatment and continues to fight. But instead of the many games where fighting is the point, here you listen to Green’s voiceover ask unanswerable questions, watch as he struggles with life’s unfair brutality, feel awe at someone so tiny pushing back against the largeness of death.

Both Quinn and Green aim to give players an experience that changes you through glancing blows or remembered scenes, a written passage that relates to one’s own life or the shock of a struggle so mightily different than our own that it makes us reconsider our feeble gripes. Perhaps these shouldn’t be called Games for Health but Healthy Games, as they don’t directly solve problems but allow their creators a platform for catharsis. The players share in the pain, and by doing so abdicates their own.

Not all problems are solvable via app or adventure. Yechiel Engelhard, while explaining Gecko Cap, software to help facilitate childrens’ use of asthma inhalers, speaks with a lisp. Luengo-Oroz’s presentation of Malaria Spot is marred by an inattentive audience; of the 30 here, fourteen stare at a screen. Amy Carton is representing Cancer Research UK, the largest collector of cancer research data in the world. She tries playing a video but the sound is off; then it won’t play at full-screen without severe buffering. No games here will fix every bump in the road.

I fear my problem may prove ungameable.

But then later, I’ll notice Carton speaking with Green over lunch. I pass by the buffet line-up of roast beef sandwiches and, twenty minutes later, they’re still talking. Carton, representing the largest cancer research operation in the world, is meeting with a single father dealing with a single case. To one, Joel is a dot on a graph. To the other, he is everything, a universe. The Macro is the Micro. Both are the same.

My own inability to speak with strangers feels lazy, unworthy. But in a room where brushing teeth is deemed sufficient to gamify, everything is relative. Moreover, I fear my problem may prove ungameable. But what’s this? The conference program includes information on Kognito, a new company focused on “avatar-based role-play conversations.” The game allows you to “speak” with programmed characters in a variety of roles, from doctors to military recruiters. Using the latest in neurocognition research, these avatars “act and respond like real people.” It sounded intriguing. Perhaps all I needed was a little low-pressure practice.

I spy the Kognito kiosk from across the room. A woman stood in front of a laptop, displaying the demo. I approach her with best intentions, before walking by, sheepish, avoiding eye-contact. Maybe I’ll download it once I get home.