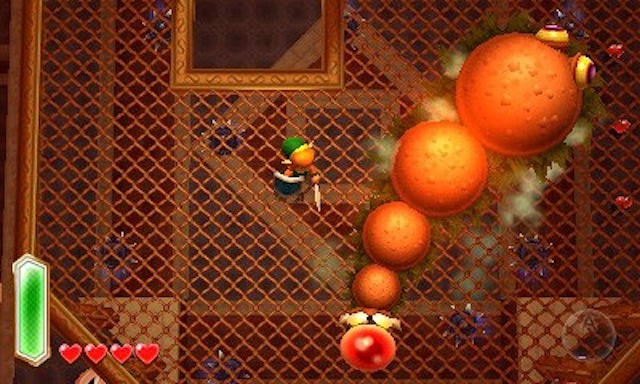 If the internet is to be believed—and they should, at least occasionally—The Legend of Zelda: A Link Between Worlds for 3DS is sublime. And for that we owe credit to Monolith Soft, the Nintendo-owned subsidiary responsible for role-playing series that are prefixed with Xena, namely Xenosaga and Xenoblade. They were brought into the fray to help with development of the latest game about breaking clay pots and harassing innocent chickens. Oh yeah, and Triforces, and world-conquering evildoers, and other things.

The extent of Monolith Soft’s involvement is unknown, as the source of this information is brought into English by way of Google Translate. But the studio is known for creating games with sweeping vistas, epic (if epically predicable) scenarios, and, importantly, difficulty, an element that has been in absentia in the Zelda franchise for years. Did Nintendo decide to bring on Monolith Soft to better appeal to the aging Nintendo aficionado?

As our own resident Nintendo aficionado Jon Irwin pointed out when A Link Between Worlds was announced, Nintendo often courts younger audiences, but now that those of us who played Zelda as tikes have aged, our expectations have changed. There has been a lot of talk lately about how Eiji Aonuma, long time director of the series, wants to freshen up the tried and tired, but true Zelda formula of a.) find item, b.) use item to clear dungeon, c.) move on. Maybe this is a hint at the direction they’ll go in.