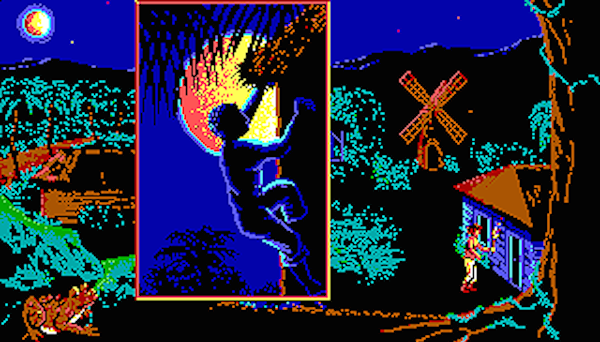 In 1988, Super Mario Bros. 2 and 3 were released. The first Metal Gear was ported to the NES. Square Enix came out with Final Fantasy II, the second Zelda was brought to the US, and Mega Man 2 was published in Japan. A budding industry’s greatest hits were surfacing as consoles came into their own and series loyalties were set. The same year as all of this, French publisher Coktel Vision released a small game for the PC entitled Freedom: Rebels in the Darkness.

Freedom, the brainchild of Martinican artist and engineer Muriel Tramis, shows little resemblance to its Irish twins. Instead of Link or Mario, it stars one of four enslaved men and women on a plantation in Martinique; instead of rescuing the princess, they seek to break their own chains. The fantasy role-playing standard that had been set by Ultima (1981) and Rogue (1980) was of little concern. A review in Computer + Video Games from 1989 showed breathless enthusiasm at the premise:

“I must admit that at the time Freedom arrived on my desk, I was fed up!! I had played sword-wielding macho white male barbarians in almost every role playing game that had been booted up on my computer, and to be honest I was getting sick and tired of them. But after reading the introductory bumpf on the Freedom cover, I felt my Role Playing buds tingling once again.”

Hang on. Surely the desire for diverse stories in gaming is a modern one. Was it not born in the crucible of unsatisfied Anita Sarkeesian fans, ungrateful for the place at the table afforded to them out of the generosity of a white male industry’s hearts? Could it have existed—pause for dramatic effect—more than 20 years ago, during the birth of the medium?

instead of rescuing the princess, they seek to break their own chains

I digress. We’ve been able to answer these questions because the evidence is still there, trapped in digital limbo, waiting to be unearthed by the few DOS preservationists working to immortalize these games, which by and large remain forgotten in the corners of basements or garages. Free sites like the Internet Archive allow anyone to upload older media that may never be re-released by publishers, and dosnostalgic’s efforts are just one part of a grassroots attempt to make sure that that these games are recorded before they disappear entirely.

Like any half-decent librarian would tell you, preserving the past comes in handy. Freedom: Rebels in the Darkness continues to be relevant today, in the way any game this bold is: it’s a story that gaming has never told. Slaves show up in games, sure. They’re commonplace in fantasies that attempt to parallel real-world conflict. The Elder Scrolls III: Morrowind (2001) contained the slavery of the in-game races of Argonian and Khajiit, where you could join an abolitionist network or crush a budding rebellion in equal measure, not to mention stroll boldly through the slave market in the city of Tel Ahrun. It’s peppered through open-world games like Mass Effect (2007), Dragon Age (2009) and Fable (2004), presented as the cold reality of an unjust world, degrading and reprehensible but a fact of life. It also takes the story away from those still suffering its repercussions today and puts it in the clean, safe hands of fiction.

Next to these examples, a game by an Afro-Caribbean woman about a violent slave revolt on the plantations of Martinique is frightening in its honesty. “It was my duty to remember,” Tramis said in an interview with Tristan Donovan for Replay: The History of Video Games (2010). 25 years later and that idea still seems shocking, as if games are somehow exempt from the calling of every other artistic medium: to tell the story of humanity, without censorship and in a way that can be understood. The desire we see for truth now is no different than it was in 1988 when Tramis told this story. These stories can be diluted, given new names and new colors, set on new planets in new galaxies with new perpetrators, but the story they tell was born on Earth, with people who are still alive today, looking for faces they recognize.

You can emulate Freedom: Rebels in the Darkness for free on archive.org.

Update: A paragraph was added to note the importance of software preservation.