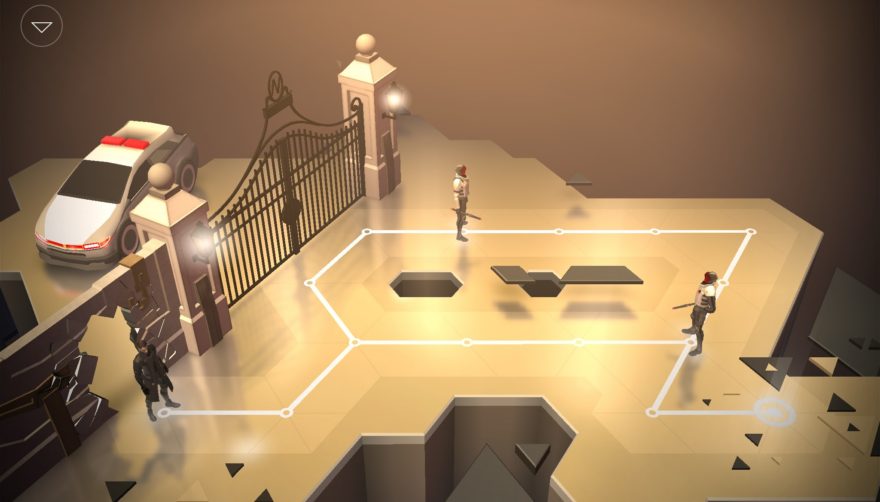 Even though the board is bared to both players, chess is a kind of stealth game. Each piece is moved in plain sight, but a successful chess player is hiding her intentions from her opponent. That opponent understands that her goal is to force a checkmate, but spends the game trying to deduce and block the path she plans to take to accomplish that. Similarly, games like those in the Deus Ex series open up multiple paths forward to the player and introduces obstacles along them to encourage her to think about the state of the playspace now, 30 seconds from now, or two minutes from now.

The newly released Deus Ex GO is the most recent entry in Square Enix’s chain of mobile-aimed abstractions of their larger games. It occupies a space somewhere between the slow ponderousness of a game like chess and the cinematic takedown-filled action of Deus Ex: Human Revolution (2011). Deus Ex GO is less abstracted than the skeumorphic Hitman GO (2014) or the cel-shading of Lara Croft GO (2015). The elaborate takedown animations, the portrait-based dialogue scenes, and the relatively un-stylized graphics come together to make Deus Ex GO feel less like an abstract spin-off and more like a game that aspires to be bigger than it is.

a game about lines of sight and blocked points

The puzzles of Deus Ex GO are based on a triangle-tiled patterns that loosely connects it to the logos and intro cinematics of the Deus Ex reboot. The result is that, from any one point, there are six available directions rather than four, meaning that Deus Ex GO is largely a game about lines of sight and blocked points. It introduces guards that chase you on one path and turrets that fire in a straight line before giving you the ability to hack turrets to be friendly or rotate certain tiles.


Most levels start you off in a loop. You go around in circles and can’t quite put the right number of spaces between you and an enemy to take them out until you’ve changed the terrain somehow. A lot of tile-based puzzlers—games like 868-HACK (2014)—rely on this format, where the key is in rearranging the units on the board so that one piece can move out of alignment with the others. Each new obstacle or hackable tile makes sense—one robot will attack you like a guard, but can’t chase. Another robot patrols in lines. The slow introduction of reasonable obstacles makes the puzzles more interesting, even if only a handful of them are genuinely hard.

Deux Ex GO also offers “Events” every week, in the form of a new puzzle for every weekday. If you complete all five, you can earn some kind of tie-in points for the upcoming Deus Ex: Mankind Divided. With all the elements in play, these are some of the most tightly-designed and complex puzzles the game has to offer, although they still go by pretty quickly.

You can purchase Deus Ex GO for $4.99 on the App Store for iOS and Google Play for Android.