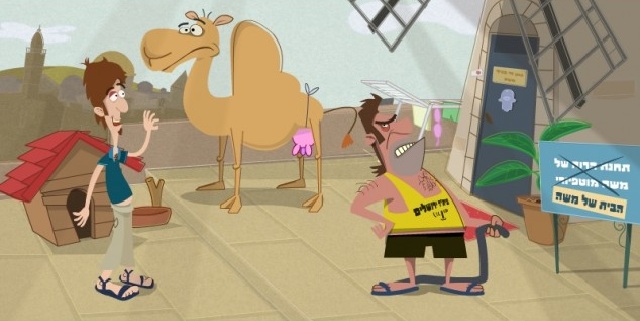 Yesterday, Israel held its first elections since the 2011 summer tent protests. Likud-Beitenu, the right wing party led by Benjamin Netanyahu, who was the protesters most obvious target, is still the single most powerful party, and has since moved even further to the right. The big surprise, of course, was the centrist victory of Yair Lapid’s whose party placed second behind Netanyahu and could be viewed as a counter-balance to the right in the coming days.

The pitfall for the protest movement, as it often is for the left, was voter turnout and fragmentation. The 400,000 people who took to the streets to protest the nation’s housing crisis were an impressive and inspiring sight, but they don’t mean as much as the (historically) 80 – 90 percent voter turnout among the very religious communities and Israeli settlements in the occupied territories. In the last election voter turnout in major cities like Tel Aviv, the base of Israel’s left, was around 58 percent.

Explaining the chain of events that instigated the social movement would require a lengthy lesson in economy, history, and the complicated politics unique to the region, but everything you want to know about the frustration of the average Israeli you can learn from a point-and-click adventure game.

In 2009, Alon Simon and Oren Rubin were animation majors win The Bezalel Academy of Arts and Design in Jerusalem. Rather than make another animated short for their senior project, they wanted to pay homage to the classic LucasArts adventure games they loved; something like Sam & Max or Monkey Island , but about a local issue that all Israelis could relate to. Simon and Rubin had dabbled with point-and-click game design before, and when a mutual friend suggested the idea of a story about a student trying to get a discount on his taxes, they began working on Arnona Race.

Everything you want to know about the frustration of the average Israeli you can learn from a point-and-click adventure game.

“Arnona” is the local municipal tax all Israelis have to pay, tied to the size, location, and type of property. It can be quite expensive, but the government understands that between the cost of tuition, juggling a job and a demanding class schedule, a generous amount of slack can be cut for the student who’s living on his own by allowing him to pay a fraction of this tax.

The game begins when its protagonist, Yigal, comes back from a vacation in India to discover that his bong-wielding, gamer roommate has failed to take care of their arnona. To avoid eviction from his basement apartment, Yigal will have to pay the arnona by the end of the day, meaning he’ll have to finish all the paperwork required for his discount.

Government bureaucracy, forms, and permits may not sound like subject matter ripe for a point-and-click adventure game, but familiarity with the difficulties involved in dealing with the government in Israel on any level would clarify how traditions of the genre, with all their strengths and weaknesses, are a perfect fit.

As the gravelly voice of the government clerk explains, in order to receive his discount, Yigal must produce the lease for his apartment, a permit from the university that proves he’s currently enrolled, and a similar permit from his roommate.

This task is nearly impossible, considering the current Israeli climate in which no one’s motivated to lift even the smallest of fingers for a young student. To the contrary, it seems like everything about the system, both the game’s and the one in reality, is designed to sabotage Yigal at every turn.

To the city council clerk, Yigal is another ID number with a sob story. To his hairy-necked neanderthal landlord, Yigal is a minor nuisance who can easily be replaced with countless other desperate apartment seekers willing to pay higher rent. Even the university’s student union is an obstacle to Yigal, as its picket line makes it impossible for him to attain his student record. To his stoner roommate, Yigal is just a whiny object obstructing his view of the television.

This task is nearly impossible…

If you’ve played a point-and-click adventure game before, you can guess where things go from here. Every item you need in order to progress requires you to first get another item, which itself requires you to get something else, and so on as the situation spirals further and further away from the initial objective. It’s frustrating, annoying, and at times feels entirely pointless – exactly what trying to get a discount on your arnona feels like.

“For me, facing that bureaucracy was a new challenge all over again every year,” Simon told me in an interview. “As a student I managed to get by. I lived in cheap apartments and I was lucky to have parents who could support me. I also don’t have special complaints against the city of Jerusalem. The bureaucracy is complicated and frustrating, but the bottom line is that you’re entitled to a significant discount on your arnona. On the other hand, you can’t compare the benefits you’re entitled to as a student to those that yeshiva students are entitled to, a [Haredi, orthodox Jewish ] community that doesn’t enter the job market and doesn’t contribute money to the public funds – which creates a great feeling of frustration and bitterness among the secular Israeli public.”

Though the game is currently entirely in Hebrew (Simon and Rubin are considering adding English subtitles), you don’t have to speak the language to realize that Arnona Race is not a somber work of political art. It is, as its developers intended, a funny piece of entertainment. A true testament to the quality of the game’s writing is that it’s surprisingly nonpartisan.

As you can gather from Simon’s statement, young Israelis are conflicted. They are grateful for and love their country, but they also know that something’s not fair anymore, a sentiment that’s expressed most poignantly at the end of the game.

Even after dealing with inane paperwork and individuals whose attitudes range from indifferent to malicious, after doing everything by the book and on time, Yigal still doesn’t achieve his goal. Games have come a long way in the maturity of their narratives, but one thing the vast majority of them still have in common is that they allow the player to win. A player learns the rules of the game and is rewarded for mastering them. Such is not the reality of a young Israeli student. Knowing the rules and playing by them amounts to nothing in terms of guarantees for success.

Daphni Leef was the first person who set up her tent on a Tel Aviv avenue in the summer of 2011 and ignited the largest protest in the country’s history. She was driven to this desperate act after her landlord kicked out the occupants of her apartment building for a remodel, at the end of which there were even fewer affordable apartments on the market. This type of situation is one of the main complaints of the protesters.

They are grateful for and love their country, but they also know that something’s not fair anymore.

Apartments are renovated out of the price range of the middle class much faster than affordable housing is constructed, leaving young people with little choice but to move back in with their parents.

This is the same fate Yigal meets at the end of his adventure. He manages to get all his permits in on time, but his landlord sells the apartment to a realtor to make a quick buck. The punch line, it seems, is that Yigal has to admit that living with his parents again is not so bad. It’s a funny joke, but mostly in the sense that humor helps us work through tragedy, which is ultimately what Arnona Race does, and perhaps the reason why it has struck a chord with so many Israelis.

Simon and Rubin are reluctant to ascribe a specific message to their game, but they also believe that games can be more than just entertainment, lending themselves to issues of social engagement.

“If we look at videogames as just another work of art,” Simon commented, “like a film, book, music, etc., then it’s a tool to convey messages. The advantage of a videogame, as I see it, is that it’s interactive, and demands participation from its audience. In short, a game is another way to raise awareness about different issues. It’s hard for me to believe that [Arnona Race] really changed something in people’s world views – and since it wasn’t our intention to use the game to make some defined political, social statement, I don’t feel that that is a shortcoming. I identify with the goals of the protest movement that calls for the creation of a more equal society in Israel and more developed welfare policies, and in that respect if the game contributed to achieving those goals or helped bring more people into the protest then that’s great.”

Voter turnout in yesterday’s election was higher around the country (up by as much as 7 percent), but only enough to tilt the balance slightly, instead of shift the country’s direction entirely.

Poles preceding the election found that the majority of Israelis agree that the country needs to reinvest in its welfare programs, that they need to foster a more equal society, that they don’t want war with Iran and that they believe in a two state solution to the Israeli-Palestinian conflict. They expressed left-leaning or moderate opinions as expressed by Lapid’s wins.

The problem is that democracy, like videogames, is interactive, and many Israelis are still finding their will to play.

A version of this story first appeared in The Escapist.