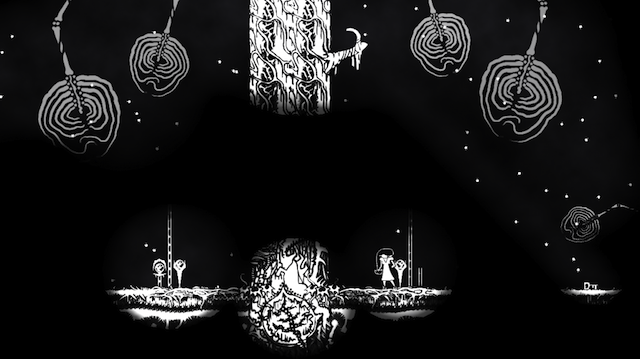 Words separate us. A word is a sound, a collection of syllables, that acquires meaning through associations people have shored up over countless years. We trap our experiences and feelings in words, like pinning butterflies or catching lightning bugs in jars. The purest sensations are those unburdened by language.

Closure is a game without words, or rather, a game with one word. The title is the only piece of writing in the game. In an era of prolixity, such minimalism is refreshing. Creator Tyler Glaiel clearly has nothing to prove. He’s spent years slowly honing his talents, creating Flash games on Newgrounds, building up his own reputation. Closure’s evolution from Flash to its current form feels organic. Words were shorn off, puzzles refined, until its official release in March; the much-lauded original pales in comparison to its iteration on the Playstation Network.

The core mechanic of the game is deceptively simple: if you can’t see something, then it physically is not there. Walls, floors, doors-everything beyond the light is an abyss, vacant and empty, and you can only trust what you can see. One learns to cling to the light. You can leap through darkened walls and dash past pitfalls hidden in the dark. The light is the only thing that anchors you: drop it, or break it, and you fall into the void.

Closure might unburden some hidden part you didn’t know was trapped.

Closure is the anti-Braid. Beyond reviewers’ hyperbole such as “lush,” “melodic,” and “deep,” Braid is a cipher of cryptic, tightly-wound memoirs bookending a (literal or metaphorical) protagonist’s epiphany. It’s a game belabored by its own pregnancy of meaning.

Closure, on the other hand, is brazenly hollow. While Braid’s stages overflow with watercolored landscapes and colorful enemies, Closure‘s stages are chiaroscuro black broken by a few scant points of light. It’s a spare, unsettling journey through the afterlife. Its narrative is purely symbolic; robbed of words, Closure might comes across as flippant or vague, but never self-reverent or pretentious. Simply open a door and your six-limbed avatar dons a mask to become a platter-headed businessman.

Each stage forms a part in three different vignettes. The businessman picks his way through a maze of girders and industrial trappings, while the background occasionally reveals the image of a clock, ticking steadily. A young girl walks into a forest, loses her footing, and falls down a well. Stages later, she falls again, then again, and finds herself in a hospital. The third character, a small child, follows a black cat through a carnival and finds Death riding a unicycle.

One might conclude that Closure is meaningless.; that the symbols and oddities could just be for show. However, there is a deep root of human suffering that pervades each “story” the game presents. Closure‘s smothering darkness is a manifestation of our deepest fears: the one thing we fear as self-preserving, thinking beings, is the terror of non-existence. Is this not what makes death so daunting? We want to believe there is something on the other side of the veil. Closure‘s existential physics are both perplexing and refreshing: if you cannot see something, then it does not exist. A thing and its function in Closure is no longer defined by labels such as “tree” or “mountain” but rather by how it is perceived and thus used-all determined by the specific way the light hits it. You might surf through a mountain on a bauble of light. You could fly through a cistern in the rays of a spotlight. Nothing is assumed: it either is or it isn’t.

This fluidity of function and form is Closure‘s greatest strength — and its weakness. Divorced from words, explanations or tangible characters, the game’s narrative merits are subjective at best. Do the symbols-the recurring clock, or the forest well-suggest something deeper, or are these merely red herrings? Closure is all game-just as a Rorschach blot is all ink-and it is an inventive, entertaining game, at that. But, like Braid or Pathologic, does it aspire to say something more?

I was undecided until I reached the end, when my xenomorphic avatar sprouted wings and, for the first time in the game, began to emanate his own inner light. I could hover and illuminate the world around me. Having found my own light, the slog through hell became an ascent toward heaven, the vacuous dark was suddenly full of flowers, and I was free to go where I pleased. It was the game’s first moment of transparency. I felt perfectly what Closure had built up to over countless hours, and unlike the similarly-wordless Journey, this climax was neither cloying nor sententious. The butterfly was unpinned; the lightning bug had escaped from its jar and could finally roam free.

Closure might unburden some hidden part you didn’t know was trapped. It might frustrate you. It might just work as a great distraction. There’s more to glean here, however, than even light can reveal.