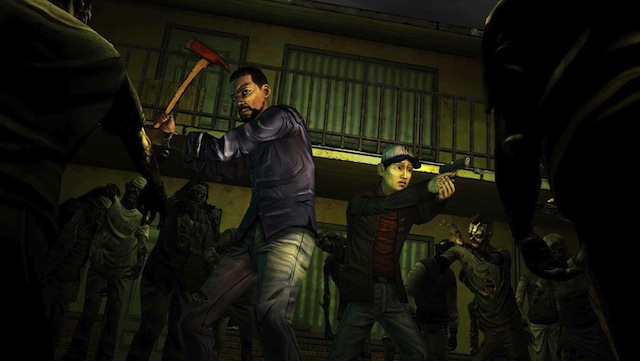 Every day, our tongues betray us, showing others the condition of our heart: rotten, clean, upended. “The tongue speaks the thoughts of the heart.” Dante’s contempt for deceit was evident in his Inferno, as the ditches of the eighth circle of hell were reserved for the ranks of the Fraudulent. How did the Deceivers appear? As tongues of flame.

We do not pay enough attention to how deceit, however minor, not only undermines our relationships, but our language and our larger social contracts as well. In games, speaking truly and fully is as hard as it is in life. Choosing to speak truly when lying for great self-benefit is an option? Even harder. The first episode (of five) of The Walking Dead,“A New Day,” dramatizes the struggle of choosing between testimony, deception and silence.

Based on the comic series by Kirkman, Moore and Adlard ,this resonant game about a Z—– Apocalypse takes place before Rick Grimes enters the Walking Dead universe. (I will not use the word Z—– out of respect for those many suffering from Z—— Ennui; besides, Kirkman calls them “Walkers”). We play Lee Everett, a character unseen in the comics. We experience his world through real-time, believable dialogue and some deft, if limited, action.

Lee is a convicted murderer. He sits in a police car on its way out of Atlanta to prison, where he will serve a life sentence. Later, it is revealed that he has been convicted for killing a state senator who slept with his wife.  On the highway, Lee’s police escort slams into a Walker, flips, and crashes. Lee escapes. He finds himself in charge of Clementine, a gamine, toe-gazin’ eight year-old. Her parents may be dead; she may be alone for good.

As Lee meets other survivors, he must gain their initial trust. All his dialogue choices are in thrall to his past crime. Shouldn’t he be frank about his history, in this new world where a proven ability to kill could form a strong strategic advantage? If he is truthful, can he trust in others to see him as a complex human being? Will they process, as the player does, that a convicted murderer can also bandage a little girl’s bleeding finger, that he can show empathy and honor?

Wonderfully, the world of The Walking Dead does not suspend the consequences of Lee’s murder. The truth still matters in the apocalypse, because humans do not stop loving the imperative for truth, or the asymptotic approach to it. Deceit follows Lee. He winces at the memory of his wife, who broke his trust in her. He suffers terribly from breaking his parents’ trust in him.

He could try to escape his past. When Carley, a regional reporter who has followed his criminal trial, confronts him, Lee has the option of answering, “It’s the apocalypse. Who cares?” I am fairly surehecares. He was a history professor at the University of Georgia. He must be intimate with the tenuous project of speaking about the past, with the intersection between personal narrative, truth and Truth.

Choosing to lie feels worse than killing in this game. Sometimes I have Lee lie, out of fear of losing Clementine. When the righteous Hershel Greene interrogates Lee about how he left Atlanta, Lee tries to be honest, but only can be so by omission. Yes, Lee got a “ride out of town,” he tells Hershel; he took it “with a police officer.” He leaves out that he was being hauled to prison.

No matter Lee’s answer, Hershel throws his pitchfork down and tells Lee he will have to “depend on the honesty of strangers” in the apocalypse, and so he needs to be honest with strangers, in turn. If there are consequences for not speaking truthfully, they remain to be seen in the next episodes.

I also care about what punishment Lee will now suffer for his murder: the judgment and mistrust of his peers? The trap of his memories?

At every turn, characters demand that Lee justify his actions.

Lee’s real penance may be the torture of testimony. Party members demand that Lee justify his actions. Glenn wants to know why Lee gave Irene, a bitten woman, a gun to off herself. When Lee chooses not to, Glenn still wants to know why. Imagine if a small holographic avatar held you accountable around the clock. You would likely go insane or collapse under the constant effort of self-examination.

What is the importance of testimony? Think of the Walkers, who cannot testify; they consume flesh and gargle. (This awful future, in which we’re resurrected as eternal mutes, has a real grip on the imagination. It may be one reason the z—– genre remainsso roach-like and persistent). If a Walker could speak, though! If Lee’s undead brother with white-blind eyes could speak, could Lee bear to kill him with an axe? Doubtful. The brother’s silence is essential.

When asked “Why”, Lee offers up evasive platitudes. Sometimes, he says, “There never was a choice,” or, “It just happened.” These answers felt feigned and too pat. I often picked “I don’t know,” or silence, because there is always a choice, whether Lee can articulate it or not.

The most exasperating “Why?” comes after I have Lee save Doug, an AV technician, from a Walker onslaught, over Carley. Doug asks Lee, “How did you choose? We both needed you.” Then, “Could you have saved both of us?” The question is pointless, as we were never given the choice to save both.

I have Lee remain silent. I am not going to offer up honeyed words (“Everything just happened so fast”) to a grown man. Adults deserve the truth. Lee made an ugly choice. I chose Doug, because Carley knows Lee’s past.

Lee can only speak of his crime to Clementine, a girl too young to know to ask him “Why.” If only Lee could tell what his heart held to all the adults around him:

I got into a fight. I killed someone. I made the wrong choice.

I wish things had been different. I wish I could have helped myself.