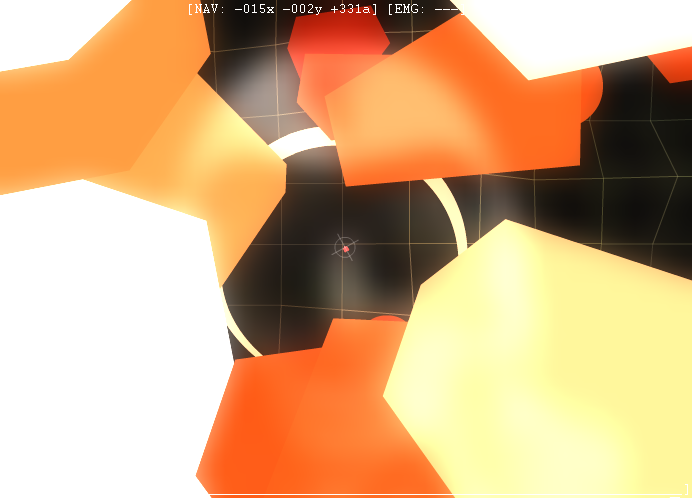 It isn’t clear at what point Farbs slipped down the rabbit’s hole. When he sat out to make Captain Forever, it was to be a small Flash game. He wasn’t expecting it to string it along indefinitely. But fast-forward five years and he is irregularly releasing alpha builds of Captain Jameson, the massive, ever-expanding universe of that game. The initial idea was simple: combine a shoot ’em-up with a construction set. What if the player could pry apart their spaceship, latch onto the debris of fallen fleets, and attach it to their own ship, building a more formidable machine? The ship, over time, would evolve. But so did Farbs’ design, his vision running away from him, growing byzantine.

The ship, over time, would evolve. But so did Farbs’ design, his vision running away from him, growing byzantine.

The hope is that Jameson will blow up, earn Farbs design nods at prestigious indie festivals, and become the Captain Forever game that breaks into the mainstream.

The danger is that the ceaseless modulations will only alienate his audience. He seems aware of this. “If I were to make it without thinking about people,” he says, “you’d just see these little robotic spaceships flying around—little boxes colliding with other little boxes.” Friends have encouraged him to include human elements, such as placing microscopic settlers with personal histories inside standardized apartment blocks. On the outskirts of the universe, you will catch glances of the pilot’s reflection flickering in the cockpit window, a solitary face staring intensely into the blackness of the screen.

Farbs, whose real name is Jarrad Woods, is attempting to do what so many ambitious creators before him have done—to plunge headlong into his craft and return with a pearl of the unknowable. When this works, wonders such as the Sistine Chapel are conceived; when it doesn’t, well, you end up with a book like Finnegans Wake—it’s compelling, yes, but few make it past the first page. His medium is code, and he is striving to make intelligible and beautiful the structure of the computer world which exists on his petri dish. But things could also go the other way. He could become lost in the remote outposts of his procedurally endless galaxy, where spacecrafts piloted by A.I. drift by like ancient trilobites of the deep.

Unlike poets and painters and epic historians, the muses of programmers are closer to Wintermute than Beatrice. If they have any kind of guiding light, it’s something like the technium, a teleological ideal of Kevin Kelly’s, which says that all technology has a subtle will, and wants to evolve into a more perfect shape—the way your ship in the Captain games gradually progresses from a fragile husk to the Death Star.

If his systems have a will, he is in its throes.

In that vein, Farbs tells me, “I’m very much into following a design rather than guiding it. I look at it and see what it should be, rather than coming up with a brilliant idea.” If his systems have a will, he is in its throes. “I felt like the game wanted to be something bigger,” he continues. “It’s tricky. Every time I sit down and play it, I think, ‘What am I worrying about?’ But when I’m not, I see unfinished bits, problems I haven’t solved, things not working.”

As it stands, the series has been through four iterations. Captain Forever came first in 2009, and since then, the aesthetic hasn’t budged. Command prompts, garbled satellite transmissions, and a beating heart-shaped box are mainstays. After that, Captain Successor added more of everything: guns, thrusters, complicated components, structural parts, personalities for A.I. types. Next came Captain Impostor, the anomaly of the bunch, which involved cloning ships instead of plundering them for scrap metal. Captain Jameson is still in pre-release, and Farbs doesn’t know when it’ll be finished, although he had hoped for it to be done eighteen months ago, before his son was born.

Still, his fans are sticking it out until the end, whenever that might be. A sparse but loyal community of space cadets gather on the Captain Forever messageboard to critique and send words of encouragement about the latest builds. Others drop by to see if the project is still alive. “The last blog update was three months ago, and the latest version is almost five months old. Just curious whether development is active, delayed, or shelved,” writes sfsdfd. Farbs has been working on Jameson off and on, updating each iteration with large batches of technobabble. A sample of a few of the changes to Build 0.5, taken from his blog:

* Made options persist between sessions

While most other large games are frequently referred to as “worlds,” Farbs is clearly enacting an universe, a span of meaningless space where majestic happenings are governed by natural laws. His views on this reality seem irredeemably Nietzschean, in that the universe is random chaos and people carve it up as they see fit. “If you put the right elements in front of someone, they will start to see patterns and things that aren’t intended. That’s what I go for,” he says.

It follows that such a Rorschach test of a place has an impartial creator. Farbs likens the process to trying to figure out how to build an idea machine. Instead of programming in his own ideas, he’d rather “use algorithms to lay out asteroids and set up little space stations for [the player] to discover,” he tells me. Writing a script is out of the question. He wants the code to tell stories itself.

If the modular elements of Farbs’ cosmos are indeed leading him someplace, it’s probably found through wormholes, one of his latest additions to the game. More than a convenient way to travel, these portals radically change everything. When you fly into them, “a summary gets passed to the bit of code that makes the next space,” he says. As it stands, you don’t necessarily find brilliance on the other side. “The tricky thing is coming up with a system that strings them together. If there was some ‘Oh my god, its gained consciousness’ moment, it’d be coming up with a system to do that,” he says. Until he finds it, he’ll keep filtering through the sequence.