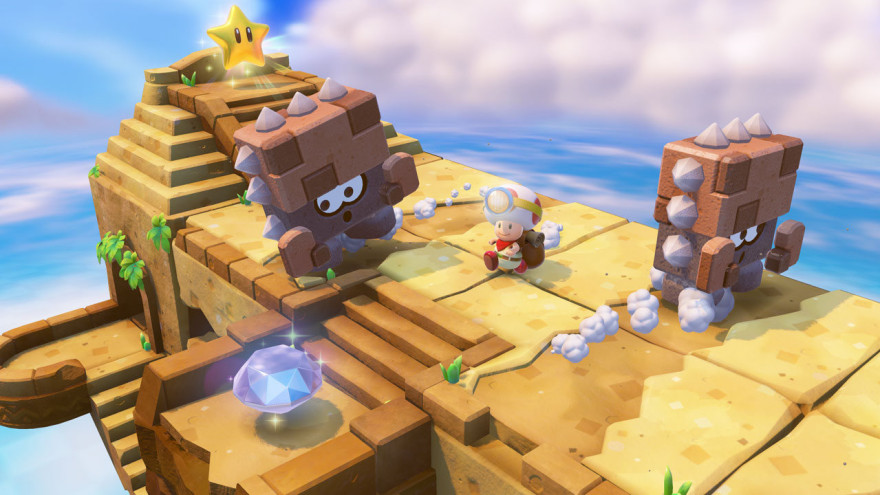 I ain’t much for cooking, though I can follow instructions enough to get the job done. The creativity of going off-book in the kitchen doesn’t spark anything in me. Better to keep things minimal; salt, pepper, broth. As a vegetarian I’m still limited, but the concept of seasoning water and building from there was a simple but effective personal revelation.

Nintendo has been in the kitchen a long time, so they know a thing or two about cooking with gas. Some might say this is part of the problem; a billion-dollar company beholden to the bottom line that chops to the rhythm of the boardroom’s bellowing. If it worked before, it’s sure to work again, right? While Nintendo is slow to introduce new ideas, they can rarely be accused of making the same game twice. (Selling it you three or four times on the other hand… .) They have tweaked, added to, subtracted from, and generally futzed about with Mario and the gang for a long time, so we shouldn’t hold out for too great of a surprise.

So what a delight, in an age where even the major-studio adventure-puzzle games of the Tomb Raider and Uncharted variety are fighting to bring you the most raw, realistic, brutal experience possible, that Nintendo takes the bones of what made Mario great in the NES era and boils them down to the marrow for a tasty puzzle soup. You’re Captain Toad: Treasure Tracker (or Toadette, the Captain’s non-gendered but adorably pigtailed adventuring companion) . You’re running around, looking for coins and mushrooms and secrets, but you aren’t Mario because you can’t jump.

Scrumptious on the surface and retro at the core, Captain Toad isn’t trying to plate some sort of grand narrative, garnished with agonized characters and earth-shattering hair physics. The game starts immediately, in a way that I had only dreamt of before: no intros, no company logos, just the Captain and Toadette waiting for you to get to work. From there the grass crunches, your boots play the ladder like a xylophone, warm lighting leads you stealthily behind Shyguys, and the lava looks plenty hot. The Wii U continues to do Nintendo right, keeping things colorful and neatly tactile. Being something of an offshoot of Super Mario 3D World, it’s no surprise that any possible technical innovations were saved for another day.

What Captain Toad the game—and Captain Toad the, um, mushroom man—don’t have is the ability to jump, and this has made all the difference. No one ever accused the original Super Mario Bros. of having too much going on, but who knew you could take away a key component of that game and still serve a mighty fresh pie? If Nintendo has learned anything from other publishers, it’s in the mobile market: a close cousin to the spirit of Captain Toad is the minimal majesty of Monument Valley. Clean, direct, and pared down, both were designed to be savored and furrowed over in bites rather than binges. They should be relished, inspected, and nibbled somewhat sparingly.

This is a slight surprise, knowing Nintendo’s notorious reluctance to move its money-printing mascots to the world of phones and tablets. It’s impossible to more strictly control the user’s experience with hardware they didn’t make themselves, and so they simply don’t bother. So it’s strange to play such a sumptuously simple game meant for snacking on a console rather than a phone.

Though of course, as it’s a Wii U game, you will be required to touch the pad’s screen and blow into the mic on occasion. And there are drawbacks to simplicity. While it’s nice to see Shyguys in action outside of the kart for the first time in a while, along with other nods to every Mario throughout the history of the franchise, one can’t help but feel that this game could have been just a dash weirder. Each level is a Super Mario Galaxy-like micro world, each thematically disconnected as you work through them, though similarities occur. The game’s camera is awkward, but,  if we think of the game as a series of tiny explorable dioramas, the camera serves as the fallible and roving human eye, the impossibility to perceive all things at once. Even if you can’t see straight, the real adventurer pushes forward and then adjusts the angle.

Captain Toad has its little secrets, tiny rewards, difficulty level that blooms at a leisurely pace. By the pound, what Captain Toad offers most is interactive charm. Nintendo confirms that the chef received your compliments and your complaints. This experience is new and old, the closest approximation of the feel of 8-bit NES friction in some time. Here we have a simple broth that plays on the tongue in a zesty way, both familiar and fresh.