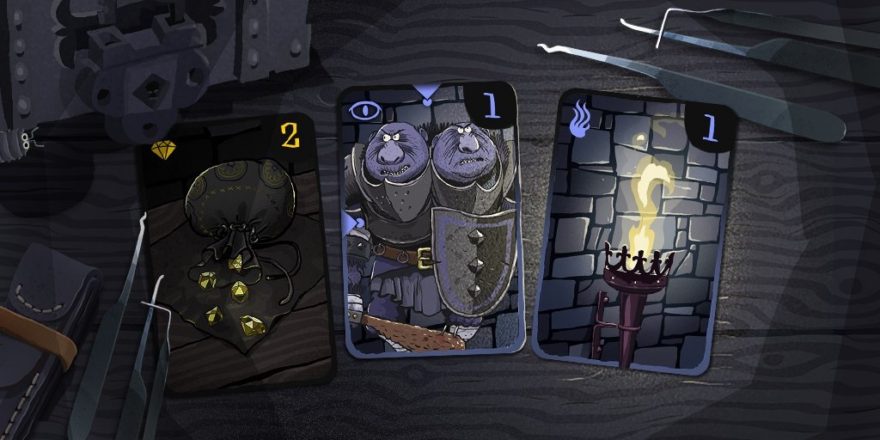 Card Thief is an upcoming game from the Tinytouchtales studio headed by Arnold Rauers. Inspired by Thief (1998) and Sage Solitaire (2015), it will see players extinguishing torches and sneaking past salivating dogs to string long chains of cards together as the obstacles mount up. Tinytouchtales’s last effort, Card Crawl (2015), also used a more-or-less standard deck of cards to blend dungeon crawling and Solitaire.

At some level, Solitaire isn’t a card game anymore. Or, it’s not a game you play with cards. Microsoft Solitaire (1989) was developed by Wes Cherry with art by Susan Kare in an effort to help new computer users get comfortable with the interface. While not the first computerized version of Solitaire, it involved using a mouse to drag and drop boxes around the screen, which was a relatively novel way to interact with a machine. As a familiar game, Solitaire was a low-stakes way to let people enjoy teaching themselves how to use their new computers. In 2005, Microsoft revealed that the three most popular games on Windows were Spider Solitaire, Klondike Solitaire, and FreeCell.


Despite the playing card’s 200-year head start, I suspect that by now more games of solitaire have been played on computers than with cards. While the standard 52-card deck produced the original randomly-generated games, now we tend to play these games on our phones. This year’s Donald Rumsfeld-designed Churchill Solitaire is a game Churchill reportedly used to play with cards, but it starts to get complicated when you need two decks of cards, a whole table to play on, and have to score your own games. It definitely isn’t a game you could play on the train, or while waiting for a friend.

Some cards have lit torches on one sides, and dark on the other

On top of that, games like Donsol (2015) and Sage Solitaire are designed to be played on touch-screen devices, but use the same widely-known format of the four-suit 52-card deck. Just like Microsoft used Solitaire to ease users into Windows, a developer working on a complicated game can assume a player is familiar with the deck of cards, and can use that as a starting point for introducing concepts that would otherwise have to be taught.

This is how Card Thief can bring in ideas from stealth games. Some cards have lit torches on one sides, and dark on the other; guards have a changing directional gaze, the player’s thief has a stealth meter that depletes as they dart through illuminated areas or bump past guards. But because the tiles are large, tappable objects with clear numbers and interactions, it doesn’t look finicky or hard to control, it looks complex and tense.

Find out more about Card Thief on its development blog.