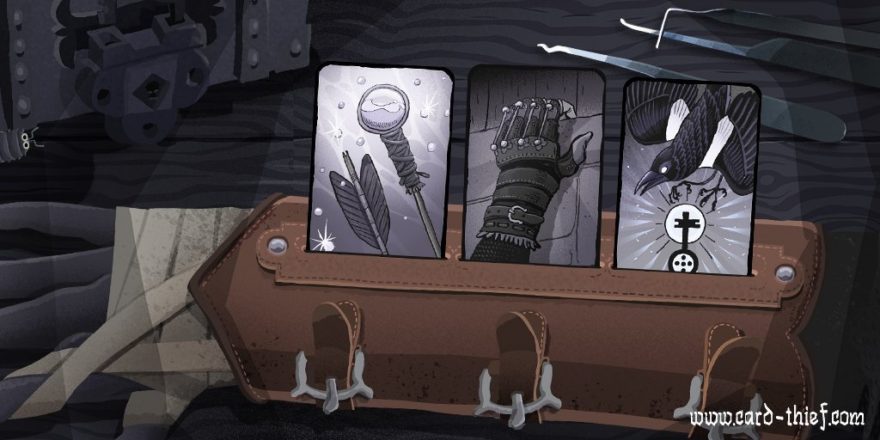 The last time we saw Card Thief, its creators were in the midst of building a stealth-based approach to card games that has more in common with Thief (1998) than, well, cards. Long story short, Card Thief uses the statistics typical of both card and tabletop games to simulate the effects of light, the direction of vision, and the player’s stealth level. It’s the same thing that might be taken into consideration as you creep behind people’s backs in an RPG, but boiled down to its most simple. It’s the same fundamental change in conditions as crouching down behind a box, just requiring a bit more imagination.

In an update posted to their blog, Tinytouchtales, the developers of Card Thief, have detailed how they experimented with the shadow mechanic so that the player would have a more complex interaction with the beginning and end of turns. They decided to allow players to move through shadows freely, providing more opportunity for play and new interactions with guard characters as well as the ability to move position without removing a card.

Since Card Thief maps cards on a sort of grid in order to determine which factors affect which card, the choice to move silently through shadows also affects enemy positions, which, as pointed out in the blog, can be used both defensively and offensively. It adds a tactical edge to the game that was naturally limited when all cards had to be removed after use; suddenly, the weakness of having 0 stealth—a requirement for moving the card in this way—becomes an advantage, as the card is suddenly capable of multiple turns of movement.

Tinytouchtales summed up their blog post by emphasizing the importance of balancing these mechanics: “As always if you add one new thing to your game make sure it solves at least two problems and maybe open [sic] new ways to interact with your core system.”

Card Thief has been a work in progress for a while now, but the developer updates and brief teasers are getting consistently more impressive. With any luck we’ll hear about finishing touches and release dates in the near future, so that we can be just as clumsy in a card game as we are in real life.