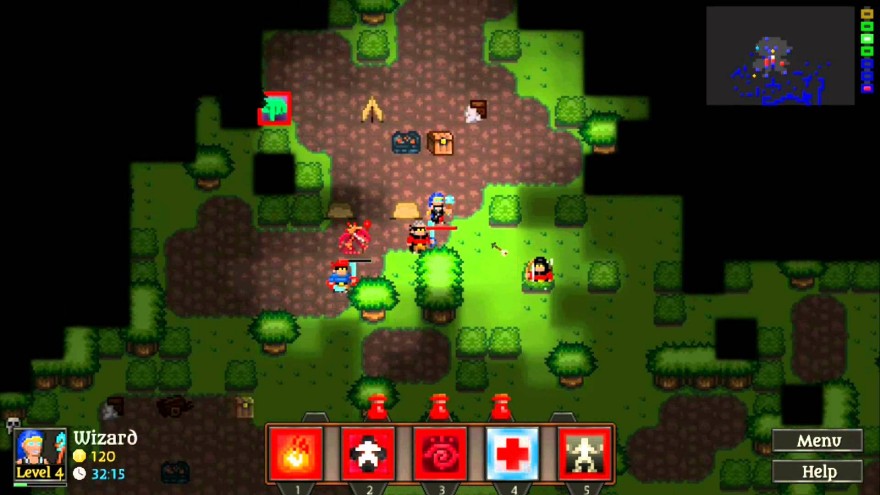 According to the Berlin Interpretation, laid down at the 2008 International Roguelike Development Conference, which is a thing that exists, a “roguelike” is a game that includes most or all of the following elements: permadeath (when your character dies it is gone and you start over from the beginning), randomly generated landscapes, turn-based combat that takes place on a grid, and a focus on resource management, exploration and complexity.

Cardinal Quest 2 is a roguelike with a straightforward purpose: to combine these characteristics in an accessible, mobile-friendly package without losing the essential qualities that makes the genre great. And on the surface, things seem great. Movement on the grid is quick and exact and the visuals communicate clearly, evoking lush forests and labyrinthine castles without making it ambiguous where one square on the grid ends and another begins. Managing items is reduced to binary choices: you can carry five one-time-use items and one each of a standard assortment of armor, pants, weapons and rings; find more scattered in the landscape and you have to choose what to keep and what to turn immediately into money.

All of which removes the busy-work and system-fluff and retains the good stuff: that is, making touch decisions on how your character evolves. Sid Meier famously defined a game as “a series of interesting choices,” and Cardinal Quest 2 seems built in that spirit, cutting off a lot of fat from the interface of a roguelike.

Sadly, it’s instead less of a game because there is too little stuff inside of it.

It might seem silly of me to criticize the game for being too small. After all, plenty of great games are light, fleeting experiences, and, anyway, the raison d’etre for Cardinal Quest 2 is to be an accessible take on an otherwise complex genre. However, the failure of this game teaches us just how important complexity is for a roguelike to work—without a big network of systems churning beneath the surface, a roguelike simply falls apart.

Moment-to-moment, a roguelike is just a clunky turn-based RPG. We don’t play to kill monsters, we play to interact with the system, to try new strategies and find new ways to interact with the engine of randomness that churns beneath the surface. Death is always profound, since every playthrough is singular, but the deaths are importantly never frustrating, since new stories always await along the next path.

In Cardinal Quest 2, that engine of randomness just has far too few systems to throw around for anything noteworthy to emerge. There is no large-scale randomization—instead the game consists of a linear progression of stages, and while the layout within each one is randomized, the randomization only exists in the details. The enemies might be in different places, but the second level will always be a bandit-filled town, the following forest will always be infested by spiders, and there will always be a minotaur in the castle basement. Even though the skills and spells found on scrolls throughout the game create a slightly different dictionary of verbs every playthrough, these are few enough that it never amounts to much of a difference between playthroughs.

Which is, in the end, a shame. This could have been a game with the eternal story-generating capabilities of roguelikes without the convoluted interfaces that classic roguelikes normally have—instead it feels like a clunky turn-based RPG with a harsh death penalty. Failing to catch that final essential element of the Berlin Interpretation of roguelikes—the complexity—lost it the essential qualities of the genre, and while it is easy to play, it is also easy to put down.