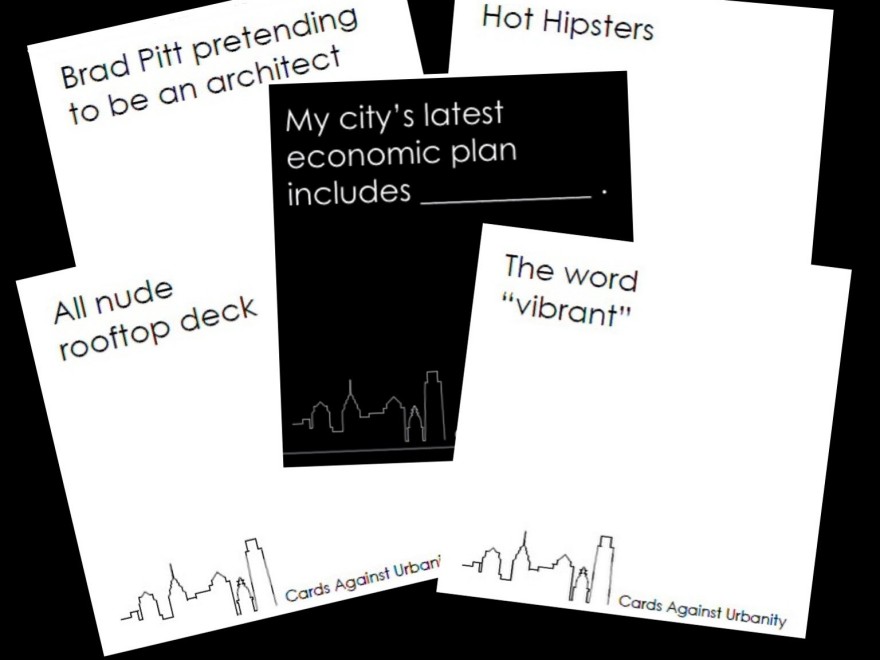 The difference between Cards Against Humanity and the sort of flashcards used for revision is, I suppose, that the latter can come in a greater range of colours. Sure, “a cat video so cute your eyes roll back and your spine slides out your anus” is not the typical exam prompt, but the mechanics are fundamentally the same. Flip the card over; deal with the hand fate has dealt you.

Cards Against Urbanity, which applies its generalist forebear’s mechanics to the lexicon of urban planners, splits the difference between these approaches. Its cards can combine into amusing nonsense, but the building blocks are all real world references. That’s why Next City’s Rachel Kaufman finds that the game has actually been used as something of an aide-memoire:

Inspired by the ways Cards Against Urbanity players are educating each other about urban planning through in-jokes, the team behind the card game is launching a new, more serious stack of cards. Call it, if you wish, Cards For Urbanity.”

What does this all say about urban planning? Maybe nothing. Maybe weird combinations of cards are inevitable amongst colleagues and social drinkers. But maybe it’s a little bit worrying that the language of urban planning can just as easily be a flashcard as it can be a joke.

In How To Speak Money, his excellent book on the linguistic peculiarities of financial discourse, the journalist and novelist John Lanchester argues that the field fallen prey to a process whereby words come to mean the opposite of what one might intuit. The term Lanchester coins for this phenomenon is “reversification.” Specific examples of this process abound—“consumer surplus” and “Chinese wall” (in its financial sense), to name but two—but How To Speak Money is really concerned with the effects of this phenomenon. If the average citizen cannot reason her way to a general understanding of what financial jargon means, she cannot participate in debates about the economy or financial regulation. In this way, obscurantist language is a democratic threat, effectively locking much of the population out of meaningful discussions.

The language of urban planning is not as bad as that of money. (When in doubt, the moneymen are the worst.) Nevertheless, the various uses of language in Cards Against Urbanity suggest that the language of cities may be moving in that direction. Laugh about it, sure, but should such a day come to pass it would represent a similar threat to democracy as the one Lanchester writes about. Here’s hoping Cards For Urbanity is a solution to that very problem.