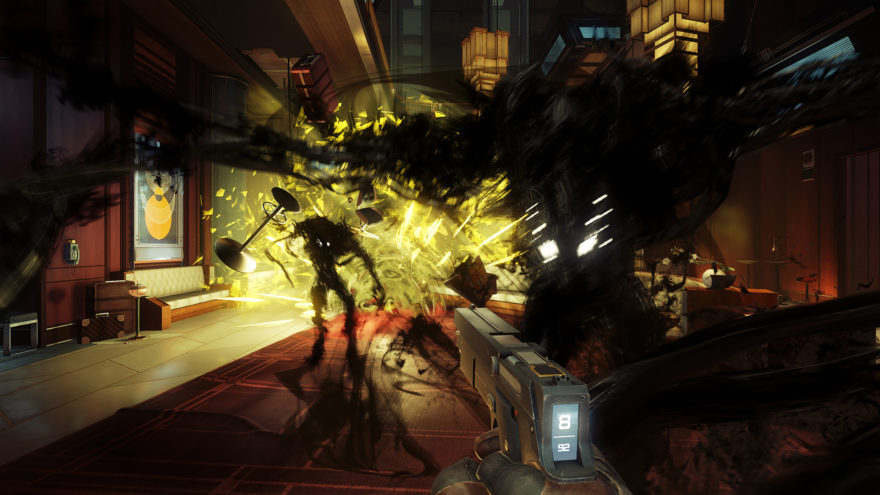 Everyone seems to be a bit confused. Prey, the non-numbered reboot of the single-game “series” Prey (2006), has nothing to do with its own franchise. “Prey is not a sequel, it’s not a remake, it has no tie with the original,” confirmed director Raphael Colantonio, a week or so ago, in a video called “What is Prey?”. The video itself even has a miasma of confusion around it, with most commenters trying to understand the non-existent connections that might be in place. “Prey is what predator eat,” offers HearMeSoar, an answer that seems at least more logical than publisher Bethesda’s retooling of the name.

This confusion is warranted then, but after this last weekend’s Quakecon, and a new trailer, the game is coming into focus. And, unsurprisingly, Prey is seemingly a fundamentally different game to its predecessor. It can only be assumed that Bethesda are seeking to capitalize on whatever latent positivity the series name might carry in an effort to give what is essentially a new idea a jump start. This bizarre and confused maneuvering (was Prey even that notable of a franchise to begin with?) has cast something of a shadow over the game, one that suggests that, for many people, the question “what is Prey?” will remain unanswered for some time to come.


However, if we leave this confusion behind, the game that stands ahead with its tentative 2017 release date looks like an interesting proposition. A psychological thriller set in an extravagantly imagined 1960s space station, there are tones of Philip K. Dick to the issues of reality and identity it seeks to explore, and something of Dead Space to its terror and isolation. However, as Colantonio has stated, the game will also carry the hallmarks of developer Arkane Studios.

promise of a labyrinthine space station

As a game developer, Arkane is marked by its refusal to fall into the common paradigm of either artistic and narrative focus or mechanical and systemic depth. Its strength lies in the ability to straddle both camps, delivering rich artistic visions with multifaceted and malleable systems, as they did with Dishonored (2012). This style stems from co-founders and directors Colantonio and Harvey Smith, who between them were involved with the revolutionary games of Looking Glass Studios and Ion Storm, such as System Shock (1994), Ultima Underworld II: Labyrinth of Worlds (1993) and Deus Ex (2000). In many ways, this bloodline seems to be the true heritage of Prey. Its promise of a labyrinthine space station, RPG progression, narrative focus, and adaptable systemic gameplay suggests it’s as much a spiritual sequel to the likes of System Shock as BioShock. And as, over time, opinion of BioShock and BioShock Infinite’s (2013) compromised form begins to sour, perhaps Prey has the potential to reinvigorate a style of game design that is both rare and distinct.

Yet Prey is not only a revival. Even at this early stage Colantonio and Arkane seem to be proposing a development of their style, with a Metroid-like structure and a renewed sense of openness. Even their treatment of the protagonist, whose name Morgan was chosen to allow players a choice between a male and female avatar, suggests a progressive approach, and a welcome awareness of contemporary debates. It’s a promising first showing then, for this most confused of “reimaginings.” Let’s hope that despite being saddled with the deadweight of a franchise name, Prey is still able to establish an identity of its own.