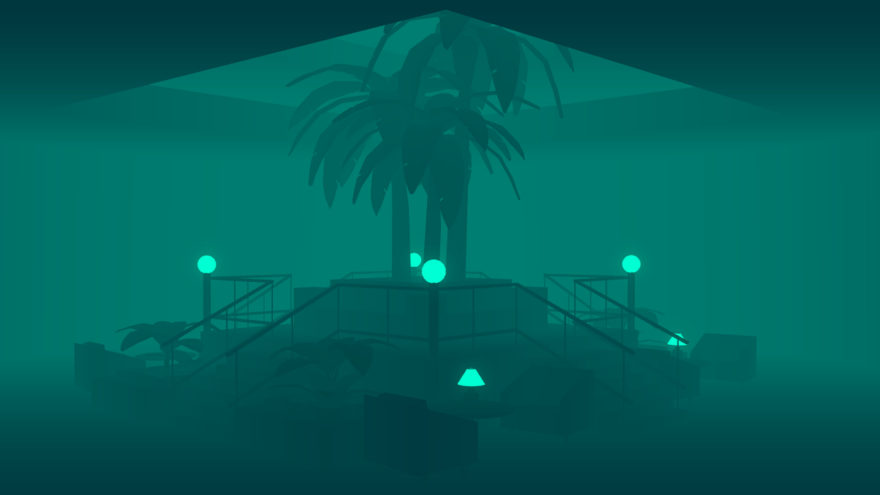 Its subtitle, “Non-Places,” is taken from Marc Augé’s book, Non-Places: An Introduction to Supermodernity (2009). “In the prologue, there is a description of someone traveling, moving through these kinds of liminal spaces,” Burton said. “They’re everywhere, but feel curiously isolating and neutral.” This might be a town square or a waiting room; places that serve no meaningful purpose other than to be endured as part of a larger journey.


It’s these places that Burton recreates with his signature art style—each scene shades of a single color, a heavy mist hanging over it all—which is intended to blur the edges between objects, to create an effect “that’s more atmospheric and less grounded.” This can be seen in his many GIFs, which he has been commissioned to produce for The New York Times, Serial, Colossal, and Medium. He decided to transform these curious, looping images into a videogame comprised of 10 individual scenes for a simple reason: to see how interactivity would affect the ideas he likes to explore.

a grotesque meshing of tree and machine

He knew from the start that he wanted the interaction to be simple enough for anyone to play, but for it to “lead the player through something more surreal and idiosyncratic” than you might get in a casual game. What he came up with works: they’re not puzzles, more like a guided sequence of inputs that take you through an evolving state of a single location. “I wanted the confusion to feel more light and realistic, like when you’re staying at a friend’s house and you have to figure out how to use their shower,” Burton told me.

In one of my favorite scenes, an ordinary public fountain malfunctions, triggering its repair mode, which has you clicking on its embellishments to raise the fountain from the ground, revealing a huge biomechanical vertical column underneath it; a grotesque meshing of tree and machine. Each scene follows a similarly unexpected reveal, where you input a sequence to uncover hidden ecosystems—as if magically awakening a creature beneath the city or the mall.

Burton chose the locations he used by rebuilding them from a hazy memory of walking around cities. “They all blur together as a remembered experience, all the malls and airports and ATMs,” he said. He relied on spontaneity to move him from one scene to the next, never knowing what he was going to come up with until he was doing it. But when he had decided, he made sure to carefully plan the space and how it changed with interaction, putting together a choreography of concrete and plastic.

seeing these pedestrian spaces as a kind of secret machine

As the visuals are deliberately semi-vague, what really helps with not only giving these places a grounding in reality but also prompting players to look for buttons to press are the sounds. Burton only used freely licensed sounds he found and modified online, but due to the influence of field recordings and BBC wildlife sound recordist Chris Watson, his audio work proves very effective—a convincing emulation of the urban real. That said, he does also make lamps buzz and fans beep, which doesn’t come across as weird as it sounds at the time. The game lures you into seeing these pedestrian spaces as a kind of secret machine, as if they all had a second function engineered into them, like a car made for James Bond that has taillights that flip to reveal missile launchers.

You leave ISLANDS with new eyes. Walk around the city or town and you may start to see small orbs of function, synchronized ornaments, patterns that suggest hidden machine parts. That possibility is at least a welcome break from the paranoia we’re driven to at most other times. Rather than a government spy hiding in our postbox there might be a mossy machine-beast ready to be unlocked.

You can purchase ISLANDS: Non-Places on Steam, itch.io, the Humble Store, and the App Store. Find out more about it on its website.