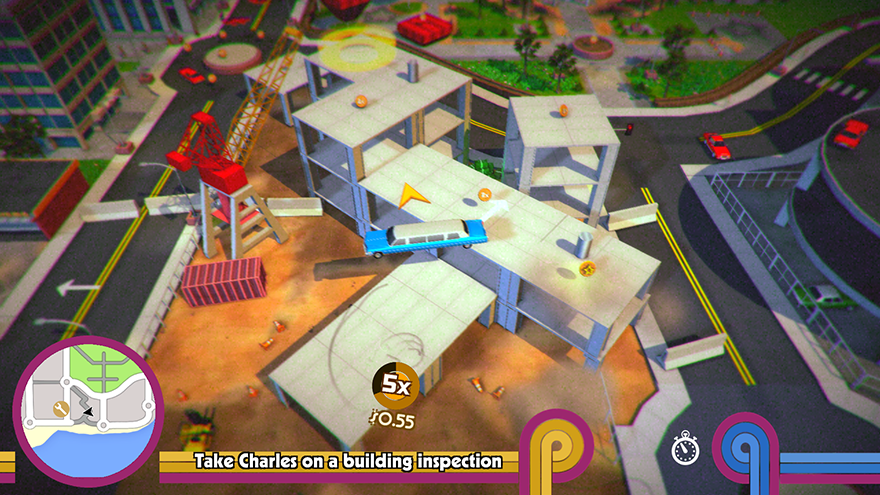 Kuru Kuru Kururin was a rather innocuous Game Boy Advance game. You controlled a pipe-shaped vehicle that perpetually spun clockwise, making traversal across the game’s many levels an exercise in timing and precise control.

Yet when I ask Dan Teasdale about his new game Roundabout, this is his primary point of reference. Which, if you watch the game’s spinning limousine, seems like the most apt comparison. But once you start moving in any direction along Roundabout’s close and winding roads, all of a sudden this game is less joyful traversal-puzzle and more State of Emergency.

Screams of pedestrians cry out as you either scare them off or run them over completely, their blood painting the floor like a kill in Hotline Miami. However, unlike Hotline, death here plays to the greater absurdity of the world in Roundabout. (Or is that like Hotline?) Score multipliers go up as you cause continued carnage across the city, ferrying passengers from point A to point B who seem quite blasé about the damage you are incurring.

There’s always been this disparity between player experience and narrative in open world games prior to Roundabout—the mass murder sprees possible in GTA and Skyrim go more or less unnoticed by the game’s inhabitants. Some non-diegetic elements still exist here (score is only for the player’s pleasure and consumption), but the general absurdity is well-acknowledged by the citizens in game. Your presence is as much a blessing as a nuisance (think Los Angeles and the Kardashians).

In Roundabout, death seems like more of an inconvenience than any sort of “final state.”

In Roundabout, a town full of the gleefully immortal, death seems like more of an inconvenience than any sort of “final state.” The brutal deaths of those you run over are short lived, as these unnamed people seem always to return to the spot of their slaying. As your limousine inadvertently (or purposefully) runs them over time and time again, they scream out phrases like “That’s the third time this week!” or “You’re worse than my ex-wife!” Their comments strike the tone of prophetic instead of desperate—their immortal lifestyle (or, one of short but infinite periods of mortality) echoes carpe diem more than, say, Drake bellowing YOLO.

Georgio Manos, the infamous “spinning chauffeur,” also seems nonplussed by the damage she incurs across the city. Roundabout’s suspiciously fast infrastructure repair network is definitely of note, but more than anything Georgio seems to latch on to the idea that no matter what, her work must be done (as discussed in Conrad Amenta’s piece here). With a spinning limo, she’s getting it done in style—mortality be damned.