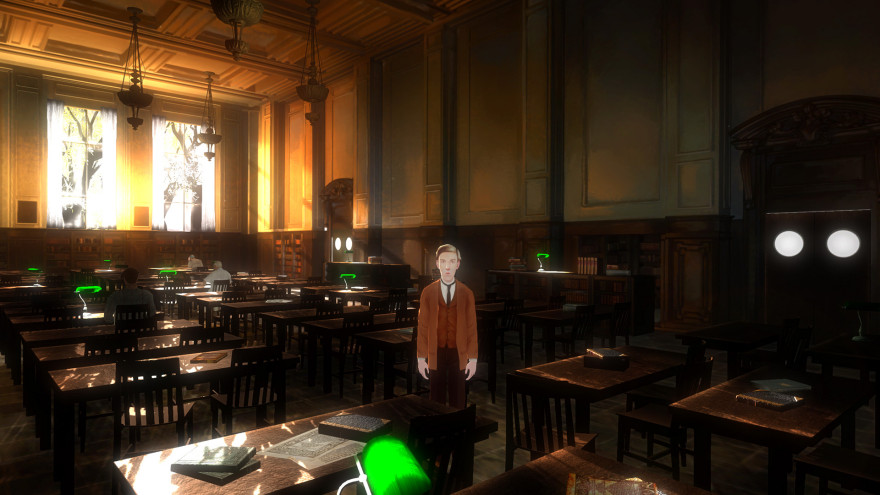 If you’re familiar with the mytho-apocalyptic horror fictions of H. P. Lovecraft you probably see them infiltrating every orifice of popular culture. Lovecraft’s prose is rife with the ontologically unknown, grotesque abominations, and deranged characters. It was all once original and classic, but you may have a hard time convincing anyone as it’s so frequently recycled into film adaptations, Cthulhu plushies, oil paintings, and yes, videogames.

Lovecraft encouraged such co-opting, as it allowed the universe and its inexorable beings that he created to exceed himself, kept alive through reproduction and tribute. He was an author that consistently toyed with the reader, provoking their innermost fears by allowing them to project personal horrors onto his unimaginable beasts; in other words, he engaged in a suspenseful act of play with his captive audience.

“the unique cosmic horror by Lovecraft starts to creep in.”

So it follows that he would enjoy his posthumous revival, scaring and playing with more of us through those inspired by his work. Of course, there are license holders to dodge, so the names of towns and entities that Lovecraft used are typically changed in adaptations to avoid legal conflicts, but it’s otherwise very easy to recognize his distinct cosmology.

Considering all this, yet another Lovecraft videogame wouldn’t necessarily be something to swivel your attention towards. But Argentinean studio Senscape isn’t creating the usual Cthulhu spin-off, which requires licensing permission from Chaosium Inc, if you didn’t know.

No, Senscape founder Agustin Cordes has, instead, spent the past year and a half negotiating with the owners of the H. P. Lovecraft brand and his writings. His proposal was to make a series of “official” videogame adaptations of Lovecraft’s stories, starting with The Case of Charles Dexter Ward. Not only has the idea been accepted, but Senscape also has S. T. Joshi, the apparent “widely acknowledged authority on H. P. Lovecraft,” assisting on the project.

This means that all of Lovecraft’s original locations, characters and, well, everything else will appear in Senscape’s LucasArts-style adventure game. It even has Lovecraft’s signature scrawled across the top of the box art. Cordes describes it as a dream come true, and was eager to tell me that The Case of Charles Dexter Ward has already proven “terrific material” for an adventure game.

“Once you meet the monsters, they simply stop being scary.”

“The structure of the story translated almost naturally into the video game format,” Cordes said. “The game feels like something out of LucasArts with shades of Gabriel Knight at first—that is, until the unique cosmic horror by Lovecraft starts to creep in.”

Everything in the story is to be captured in the game: from the dreamy excursions around , (“filled with details of architecture, genealogy, and history”) to the trips to with its background in witchcraft and occultism, and of course, the memorable conclusion beneath Pawtuxet farm.

Having the official licensing doesn’t exclude Senscape from the mistake that countless others that engage in Lovecraftian horror make: spoiling that playful “fear of the unknown” by illustrating the object of horror. To my relief, Cordes is familiar with this obvious but oft-repeated mistake made by others. He was even able to inspire some confidence in me that The Case of Charles Dexter Ward was in safe hands and that the adventure game genre was the right fit for it.

“Adventures—by definition—aren’t constrained by mechanics in other game genres,” Cordes told me. “A survival horror, or RPG, or action game would demand some sort of confrontation with the powerful entities described by Lovecraft, and that’s when this fear of the unknown stops working. Once you meet the monsters, they simply stop being scary. Not only that, but this isn’t genuine to Lovecraft’s concept of primordial alien creatures that can’t be comprehended, and even less confronted by puny humans.”

“this film will offer a rich background on his fascinating persona and life in .”

What Senscape, and specifically Cordes, further brings to The Case of Charles Dexter Ward is experience in working on two other slow-burning supernatural horror games. In 2006, Cordes released his first-person horror game Scratches (also the first commercial videogame made in ), which was heavily inspired by Lovecraft, even directly referencing the Necronomicon and R’lyeh. It follows a writer, the new inhabitant of a house that has a horrific past, as he uncovers the ghostly scratches across the walls. Cordes then went on to found Senscape with a new team, and is now finishing up production on Asylum—a haunting exploration of the desolate interior of Hanwell Mental Institute.

Now that Asylum is nearly graphically complete, the plan is to move part of the team into parallel development of The Case of Charles Dexter Ward. There is one hitch: funding. Senscape is hoping that, once again (as with Asylum), it will be able to use Kickstarter to acquire the funds needed to see its next game through to completion. But there’s more than that, too.

“We’re adding in the mix the filming of a behind-the-scenes featurette and documentary on Lovecraft himself that will complement the experience,” Cordes said. “Just as we’re determined to deliver the ultimate treatment of Lovecraftian lore in games, this film will offer a rich background on his fascinating persona and life in . In fact, it will be filmed on location and hosted by Mr. Joshi.”

Hoping for the best possible outcome—full funding through Kickstarter—there are stretch goals that, if reached, will go towards producing two more official Lovecraft adventure videogame adaptations.

Let’s just hope some manifestation of ultimate horror doesn’t arrive to paralyze what could be.