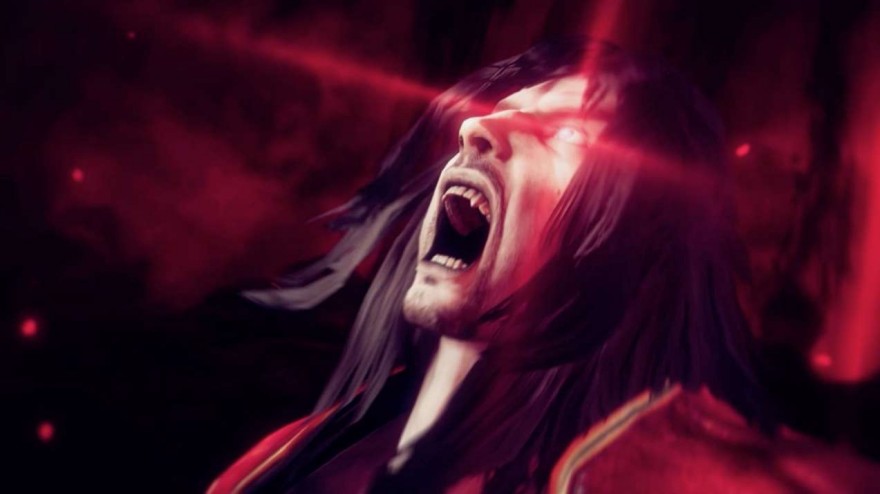 Here’s a story: A creature of the night, both more than and less than human, is abandoned by his creator, outcast from society, and turns to desperation, violence, and revenge. Experiencing this story, even as we are repulsed by the creature’s hideousness, we come to sympathize with his plight, and the tension we feel between our revulsion and our common humanity makes us ask questions about what it means to be human.

I’m talking about Mary Shelley’s Frankenstein, obviously. Not Castlevania. I think that’s sort of what developer MercurySteam was shooting for in Castlevania: Lords of Shadow 2, but I’m pretty sure they didn’t achieve it in the way that they’d hoped.

Press B to Feed

The game, in the great Gothic tradition of both literature and Castlevania, wants to be grotesque. Specifically, it wants to paint its protagonist, Dracula, as a grotesque character: a figure who elicits both disgust and sympathy, who makes the player both recoil in horror and ache with pity. But the game doesn’t have the narrative chops to pull this off. In the prologue, for example, Dracula emerges from seclusion in his throne room to gaze upon his great castle-city, besieged by hundreds of thousands of faceless warriors in identical armor, and utters the line: “What is a man? A miserable little pile of secrets!”

There’s no real prompting for this utterance, and it doesn’t make a whole lot of sense in context. As the player, however, it’s pretty easy to understand what’s being said here: “This is a Castlevania game! Do you remember when Dracula said that line before?” It’s a moment that’s emblematic of how the game handles its narrative: In between segments of lithe combat, the player is given story beats which are garish in their lack of subtlety—either they’re exposition with barely any pretext of set dressing, or they’re plot points wielded with all the grace and tact of a spectral whip literally made of blood (blood is a very big deal in Lords of Shadow 2).

Even as I feel my stomach turn as I’m instructed to “Press B to Feed,” I can’t help but feel a little sorry for a game that’s trying so hard.

And this is the crux of Lords of Shadow 2: it doesn’t really succeed at making me feel both disgust and sympathy for Dracula (nee Gabriel Belmont), but I definitely feel both of these things for the game as a whole. Because for all that the narrative is awkward and forced, for all that I wish that many of the story sequences had ended up on the cutting room floor, there are elements of the game that make me wish I could invest myself in its premise, pieces of the experience that are as stately and darkly handsome as Dracula himself.

You are Dracula, and Dracula is a Bad Guy.

When whipping through hordes of ghouls, the game is every bit as enjoyable as the original Lords of Shadow. The sequel retains its predecessor’s use of a light/dark magic system, which requires the player to switch on the fly between powerful attacks that can break through enemy defenses and weaker ones that drain life from foes. A few additional tweaks, like a system that rewards you for practicing various moves and combos, encourage you to explore the multifarious ways you’re allowed to whip and slice and punch the denizens of the dark. MercurySteam borrowed heavily from God of War when they constructed their first take on the Castlevania franchise, and Lords of Shadow 2 is cut from the same cloth. But as cloth goes, it’s quite fetching, and there’s a reason that these games have done well: combat feels good, and there’s enough variety in this iteration to keep it feeling good until the credits roll.

The bosses, in particular, are a high-videogame delight, and serve as an excellent counterpoint to those who think “boss fights” are antiquated. The loop of killing minions to fill your magic meters and then putting those magic meters to use while taking down colossal, screen-dwarfing enemies is a gigantic satisfaction. While half of the bosses in the original Lords of Shadow were stolen from Shadow of the Colossus and the other half were stolen from God of War, the big encounters in Lords of Shadow 2 do a better job of blending the two influences. They still borrow pretty liberally, of course, but if slaying giant, hideous abominations is your cup of tea, then Lords of Shadow 2 puts the kettle on.

And, also like the first game, Lords of Shadow 2 lavishes attention on its sets. The stationary camera of the first game has been replaced with one that’s more conducive to combat, which forces players to seek out the picturesque vistas themselves, transforming them from show-off scenes into bespoke, almost personalized breathers from the action. These might just be cities and castles and dungeons, but now that you can you’ll want to slowly spin the camera around, drinking up their rubble and moody lighting. Its score, too, ranges from melancholy to invigorating, lending a dramatic weight to the proceedings which the script doesn’t nearly earn—an effort it’s aided in by Robert Carlyle, who voices Dracula with such professionalism that your heart sort of breaks for him.

There it is: sympathy for the game. Can you tell that I want to like it? Like Frankenstein’s Creature, there is goodness at its core for those who look for it—but like the Creature, it has done some pretty terrible things, like including ill-advised stealth sections in a brawler. (Most of these sequences are brief, but none of them are fun.) I enjoyed much of my time with Lords of Shadow 2, but like all grotesques, it may be hard for many to love. For all its physical beauty, it can be an ugly game—remember that family-murder, remember that awkward, stilted script. How well can you look past this ugliness to find the redeeming qualities within?