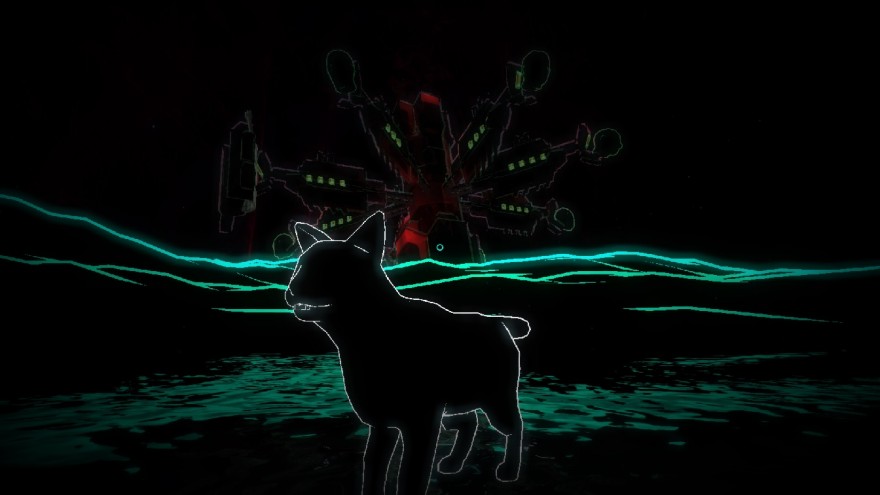 This cat is out of place. But maybe all cats are out of place. The one in Psychic Cat is probably no more suited to its environment than, say, my cat Smudge who fell through the roof of the greenhouse last year. The temptation was to call Smudge a klutz at the time (and let’s be fair, Smudge, you are an absolute dingbat at times). But it’s not his fault. We humans invented glass and the concept of a greenhouse. Imagine how strange glass is to a cat. Some hard invisible material that seems to trick light. Think of the puzzling terror they must overcome in that introductory moment when everything in their genetic code draws a blank and their inner alarm bells start ringing.

The point is that the synthetic world we build on top of the natural one must seem incredibly alien to a cat. It’s no wonder they’re so apprehensive when having a new plastic product that was made for them shoved in their face. Too right they’re going to give it a sniff and scan your face for any evidence of deception before biting into it. Do you blame them? I’d hunch up like an accordion and give it a frightened lick as well.

The “blasted psychosphere” in Psychic Cat doesn’t seem so far-fetched in consideration given that it throws you into a cat’s perspective of the world. The cat you control clumsily collides face-first into the jagged rises and falls of the ground as it runs in otherwise elegant animation. And it has to run as there are no trees to climb, no boxes to curl up in; just a vast wasteland with shimmering black lakes and rugged terrain that seems to stretch on forever. Have you ever seen a cat running across open ground? It’s a rare sight. They usually pop in-and-out of cover, darting across roads, between bushes. A cat can’t survive in this much open space. It is enormously vulnerable.

You feel this before you even meet “The Strange Ones.” They appear alongside bizarre electronic squeals from the soundtrack, humanoid and glowing toxic green. They tower over the cat ready to stomp it out of existence. I had a cat that got thrown into a sack and kicked while inside once. It sat at the front door in the early hours of the morning crying and wounded until we woke up. Humans are shit sometimes. And these Strange Ones seem to embody that.

Now we have a bewildering open world and everything sentient inside it turning hostile upon catching sight of your feline form. As the game’s description reads, this “cat is in trouble,” but the how and why isn’t expanded upon beyond that. This is probably due to Psychic Cat not necessarily going for the ‘wow, cats must have it hard’ angle. This is clearly not a simulator. In fact, it seems to be concerned with nothing else except exploration of its all-black, quasi-phosphorescent landscape. The cat may simply be an icon for our own curiosity.

Move the camera around to see beyond the cat’s gaze and you’ll see a luminescent purple-red fractal smeared across the sky. It’s beautifully unexpected and stands out as much as the other rare landmarks to be found. The Strange Ones gather around gigantic spacesuits projected as a hologram or frozen into transparent rock where they kneel in prayer and pose as if in admiration. Weird creatures. Burnt out wrecks of spaceships implying a scientific failure also attract their lurching forms. One of these derelict ships is so huge as to have its own weather system; specifically, its frazzled electronics conducting a lightning storm high above the reach of the cat’s agile jump. You can walk into tears of bright neon as if passing through a Star Gate in 2001: A Space Odyssey. Except escape isn’t that easy.

With nothing being explained in this place and it being consequently abstruse it may take a while for you to realize the true implication of the game’s title. Psychic Cat doesn’t refer to its potentially ‘psychedelic’ visuals. The cat you play as is actually psychic. Well. it has the power of telekinesis, at least, able to pick up and move cubes with its mind. You can even send them barreling into The Strange Ones to have their ragdoll figures start twitching in harmless displays of agonized submission.