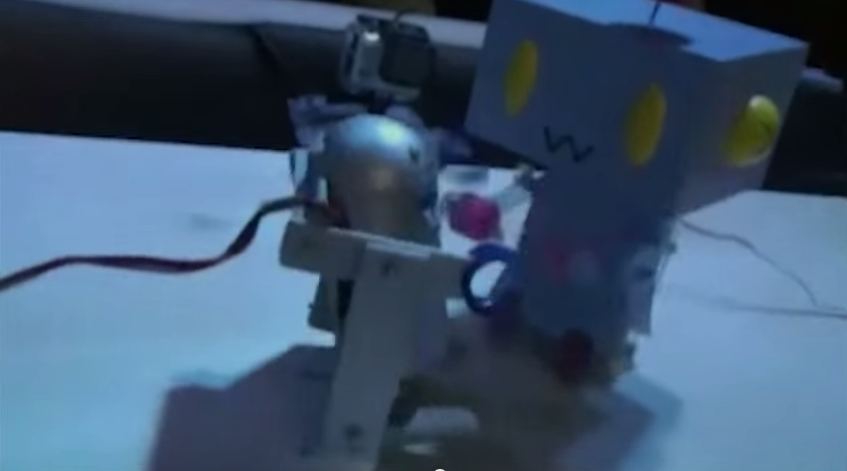 Well this is probably the best thing you’re going to see all day. Remember Battlebots? This is why Battlebots sucked. A group of 31 people got together in Japan recently for Hebocon: The Robot Contest for Dummies. The sumo-like matches pitted one crappy machine against another to see which could stay in the ring the longest. The wrinkle that makes it interesting is what they called “the high tech penalty”—that is, robots were not allowed to have a “high-tech element.”

Thus sprang forth abominations like the “amazing quick floor,” which was a piece of cardboard attached to two small motors; a robot that shook powdered soup; a godless thing that used Barbies as appendages; the thing which shall not be named in the picture below; and so on. The summary video cheerfully notes that getting robots to work or even move was one of the major challenges. The real joy came from the stupid, low-brow creativity on display, which only got more wild as the matches went on, and pieces of losing robots were attached to winning ones in order to “carry on the spirit.”

There’s a certain punk-rock, luddite glee going on here, taking place in arguably the most tech-obsessed culture on the earth. One contestant lost her robot on a train, then got tired of looking for it and instead posted a picture on Twitter of a beer she was drinking. The audience applauded this act of supreme crappiness. Hebocon embrace crappiness not just as an aesthetic ideal but as a lifestyle. After being reprimanded by my dad for belching too often at Thanksgiving, this is something I can get down with.

Check out the whole video below.