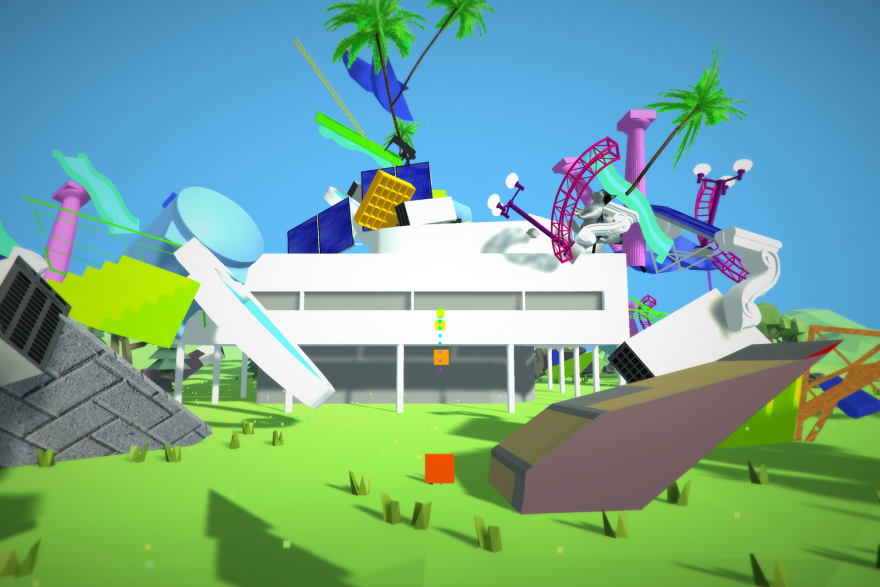 What better way to celebrate it being 50 years since influential Swiss architect Le Corbusier’s death than redesigning his famous Villa Savoye? Oh, not actually, of course. We couldn’t possibly bear to spoil what is considered by many to be one of the keystones of modern architecture (and also an official French historical monument). We’re talking videogames here. Yes, it’s their easily-reset worlds that allow us to enjoy reckless fantasies without consequence (usually), so why not employ them to deface a prestigious villa that sits on the edge of Paris?

This is the concept of a new project by Greek-born Theo Triantafyllidis, who is currently a student in UCLA’s Design Media Arts program, and creator of the dating app parody Pin-Pon, which we previously covered. He was commissioned by the #decorbuziers exhibition that took place in December 2015 in Romantso, Athens, to produce a videogame that, in some manner, paid tribute to the late architect. What Triantafyllidis came up with is called Le Petit Architecte.

Much like Pin-Pon before it, Le Petit Architecte embraces chaos, glitches, and silliness. It places you as a young, inexperienced intern who is destined for greatness as they will one day “create the absolute architectural masterpiece.” Hmm. Perhaps you can help along with that. Jumping into this intern’s perspective, the game gives you the ability to throw (yes, literally) architectural pieces in front of you. This intern is clearly quite strong in the arm considering they’re capable of throwing iron ladders, doric pillars, and entire arches made of stone at a reliable and handy height and distance.

But that is not this intern’s only feat. It seems that they have also found a way for all of these hefty building pieces to stick together upon contact. The architect’s arch-enemy is gravity, but not this one: with them, you build a higgledy-piggledy tower of supreme balance and strength. It’s best built Minecraft-style. That is, standing atop the highest point of the tower, and then spamming the jump and build keys so that you steadily arise, and the tower with you.

The finished sight would render not only the best architect’s in the world speechless but its variety of bright colors would also hold every single toddler spellbound. There are blues, yellows, greens, reds; a tootie-frootie lollipop of a tower. Not only that, but the tower’s materials aren’t even sensible. Along with the bits of wall, arches, and pillars, there are also doors, cats, pianos, lamp posts, and slides. Wonderfully, each individual piece makes a sound relative to the object when thrown: cats meow, pianos crash discordantly, and so on.

Given the absurdity of it all, what Le Petit Architecte may end up bringing out in you is not an interest in creating the tallest tower possible, but as much of a mess as you can. The entire voidscape within which sits the Villa Savoye at its center can be filled with a mass of architectural bodies, careful design be damned. Put too much clutter down and the game will start to break, with objects desperately vibrating in empty space, unable to find purchase, and eventually, a whole tornado of over-sized toys can be sent juddering around you. Le Corbusier wouldn’t have approved of such destruction but he would have most likely marveled at the sight of it all.

You can download Le Petit Architecte for free for Windows and Mac over on itch.io.