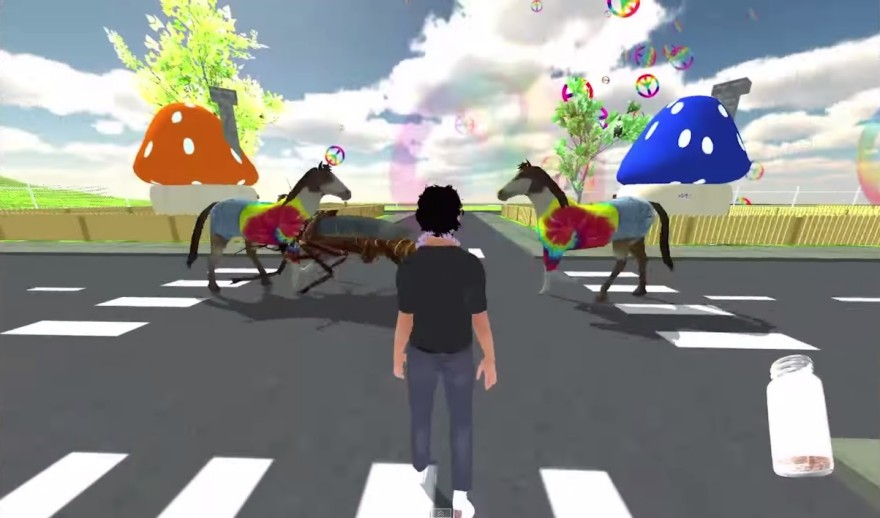 The unifying theme of most of synth-popping musician Lucas Nathan’s work is discomfort. There’s a section in his song “Clarity Shmarity” during which a discordant mashing of keys rises in volume and pitch, stretching out for long enough that it becomes disturbing. Here, Nathan deliberately causes the tone of his digital instruments to contrast with the unquestionably pleasant hops and skips that they play in the rest of the track.

It’s in moments like these that Nathan deliberately exposes his two-sided nature—of love and fear, joy and estrangement—through his music. On one side is the busboy Lucas Nathan, who sits higgledy-piggledy at a desk in a lightly tie-dyed t-shirt and a violet lei slung around his neck, while black-framed glasses suggest a less carefree rigor. On the other is Jerry Paper, who is the entity that Nathan says embodies him as a multi-dimensional being, teaching him the ways of some psychedelic alternative spirituality.

a chaotic tale of angst in a simulated world starring an inter-dimensional man.

Together, these two personalities combine the far-out, sublime transcendence associated with the ’60s, with a more refrained and dweebish anxiety attack. There’s hesitation and stammers in the uncertain beats of his psych-pop. He plays an awkward limbo; stuck between wanting to be easygoing and fighting against a worrisome state of mind.

This uneasiness is also what emerges while playing through Synthesized Mind, which is the single-level demo of Nathan’s much bigger, much weirder videogame Dr. Javier Genneheigen’s Chameleon World. The single level is a chaotic tale of angst in a simulated world starring an inter-dimensional man. The image that best surmises the discomfort in the demo is one of a computer message prompting the deletion of Jerry Paper, which is broadcast onto the walls of his floating house as it disintegrates.

This videogame is not a standalone creation: it was made alongside his latest album titled “Big Pop For Chameleon World.” Side-by-side, the two creations become one to form what Nathan described to Bullett as “a sonic instruction manual, a puzzle-in-album-form designed to prompt those who interact with the work to ask questions.” He also claims that it’s propaganda for Clowndescence™, which is apparently the spirituality that Jerry Paper subscribes to.

The presence of this bizarre, subliminal education is why you are told that “you still have much to learn” at one point in the game. It may not make sense to most, especially as it’s spoken by a toad in a top hat and a pattern-printed button-up jacket that stares unwaveringly at nothing. Because of course it is.

You’ll also find overgrown beetles with denim carapaces walking the streets, an entire gallery of stretched jpegs displaying unnerving clown faces, and countless fidget-dancing facsimiles of Jerry Paper. More and more icons for the overarching discomfort. And if you really want to push the reading, you could say that the chameleon itself embodies it best; being able to turn its skin to any psychedelic color, but doing so to hide away from what it perceives as threats rather than a celebration of the free.

it isn’t a nonsensical tapestry but an authored digital weirdness

Nathan’s game is one of the few that seems to share the same dream logic and early 3D feel as Worlds, which has allowed internet users since the ’90s to connect digital rooms of their creation without any rhyme or reason. In Worlds, you can travel from a bar that has been plucked out of the Blair Witch mythology to a shiny grey space station that houses a portal to hell. It’s the same in Chameleon World only that it’s structured by the songs of an album. Unlike Worlds, it isn’t a nonsensical tapestry but an authored digital weirdness that suggests meaning in its bizarre mismatches.

Unfortunately, you can’t play Dr. Javier Genneheigen’s Chameleon World unless you purchase the vinyl LP of Big Pop For Chameleon World. So, unless you intend to fork out the dollars for it, you’ll have to dwell on Synthesized Mind, and watch the video above in order to imagine what the larger adventure is.

You can play Synthesized Mind in your browser or download it to your computer right here.