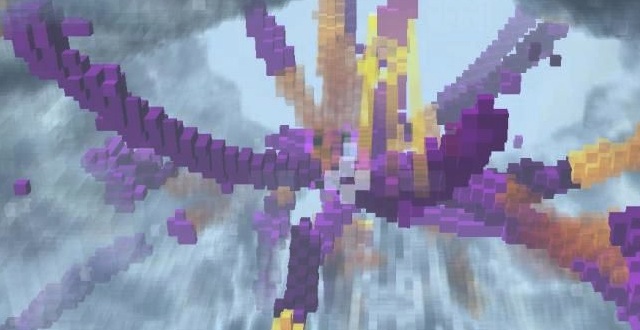 “Technology seduces us with its power of invention, and I’ve shown with Cell that at times I’m too weak to resist. So there is also a certain joy in the power of technology, a fascination with the intelligence of machines, and a secret hope for cataclysmic change that runs through my work.” So begins my conversation with Sheldon Pacotti, the science-fiction author and writer of the first two Deus Ex videogames. He’s currently neck-deep in finishing his first game as an independent game designer, the fascinating Cell: emergence, which releases February 9. Cell takes a premise from Fantastic Voyage and tasks players with battling disease from within a sick child’s body.

But this is no schlocky B-movie, and Raquel Welch and the good ship Proteus have been replaced by a landscape of dynamically generating graphics representing the various building blocks of the human body. The game is based on the idea that a complex, lifelike simulation can be created, interacted with, and ultimately changed by those interactions. It’s heady sci-fi stuff, Pacotti’s bread and butter. It’s also fascinating and unprecedented, even in the quirky world of indie games.

Pacotti is bright, energetic, and passionate about technology’s complicated relationship with science. We were able to catch him in the present for a brief moment to chat about voxels, “punk rock” game design, and the need to keep our eyes on the horizon.

Tell me about how you conceived the idea. The story, graphics and gameplay—the mix of strategy and shooter, the “massively reactive” mechanics—all strike me as being quite novel.

I started Cell hoping to make a uniquely generative game engine, in which simple rules result in complex imagery and behaviors. It was meant to be fundamentally social, with players contributing rules and objects of their own, exploring vast mathematical possibilities.

Game worlds composed entirely of living particles are a new frontier in my mind, promising a wave of discoveries akin to the exploration of 2D-sprite-based games in the ’80s and the 3D-model-based games of the last decade. I was there when 2D sprites were new, and it’s been great to feel some of that same excitement again. The wonder I felt at 13 putting a space alien in motion on my TI-99 is not so different than what I’ve felt looking into the world of Cell emerging from a handful of rules for growth, diffusion, destruction, and so on.

I’ve always had a perverse faith that computation would give birth to a new form of life. The technology behind this game, inspired by Conway’s Game of Life, is exactly that, and the design, by osmosis, expresses the same theme.

There’s a definite thematic bent to your work in videogames—as the writer of the first two Deus Ex games, and now in Cell. You seem to deal in futurism, the complex relationship between machines and humans, and the general complications of new technology. What other threads do you see carrying through your work?

Well, I do take technology personally. I have to submit to machine culture every time I sit down to write some code, and at different stages in my life this has been my interface with human society. It can be deadly to the soul. When I write about machines encroaching upon humanity, I’m imagining myself submitting to the cold logic of the computer. This is also a theme that runs through a new novel I’ve been shopping around that focuses on the genetic engineering of the human brain to make it more useful.

You would think that the soul of a computer programmer would be a very limited subject for fiction, but I still find myself groping for the right expression of humanity’s place within the increasingly aware machinery of their society.

“I’ve always had a perverse faith that computation would give birth to a new form of life.”

What are the strengths and weaknesses of exploring your chosen subject matter through games, as opposed to other media such as novels? Is there an authorship problem? Do you fear your audience not “getting it,” or do you cherish the possibilities interactivity gives you?

The best stories don’t dictate a message. If they genuinely capture a slice of life, then by definition they are infused with ambiguity—moral choices, irony, multiple interpretations. Scholars love the act of tracing different paths through these possibilities. My hope is that videogames will become the gateway into this pleasure for general audiences. For that, choice in games will need to move beyond good versus evil, as seems to be the fashion in interactive narrative, to more vexing, non-obvious choices.

Someday, I’d like to do a deeply branching (or “responsive”) game story to explore this notion, using “serious” subject matter; but with Cell I just wanted to go hands-on with all of the other storytelling tools available in games—level design, player input, visual effects, sound effects; etc. The game takes on the supremely challenging task of convincing a person that they are living the life of a nanite—something I doubt could even be attempted in another medium.

Did you do much research on cellular biology and infectious disease while putting the game together? Any interesting tidbits you’d like to share from looking into the subject matter?

I’m very anal-retentive when it comes to research. I have a fat textbook on human physiology that dates back to Deus Ex, and piles of research from the (still unpublished) genetic engineering novel I wrote. Though Cell isn’t a mathematical simulation of biology, every colored block is fictionalized as a T cell, antibody, membrane, or some other macromolecular substance. My main takeaway from the research is that medical nanotechnology is going to look a lot more like biology than mechanical engineering. Even in Deus Ex, I was postulating “nanite-capsid” hybrids as the likely mechanism for augmentations. The Star Wars-esque battles in Cell are probably a bit of a fantasy. But who knows? Very small nanolasers are a reality in laboratories today. Certainly everything in Cell “might” happen…

The ironic thing for me is that this project—meant to be a casual, lighthearted foray into “indie” game design—has only increased my appreciation for the professional game studio. I started this game all punk rock, thinking I would just grab whatever public domain assets I could find and slap them together.

But games operate on too many artistic levels for one person to handle. This past year has been a gradual realization that without a lot of original polished work from Robin Arnott [sound design], Lindsay Rigling Smith [illustrations], and Logan Middleton [music], plus actors and line production from Adam Hilton, this game would be just an ugly tech demo. I look forward to deliberately shooting for even more polish in subsequent projects.