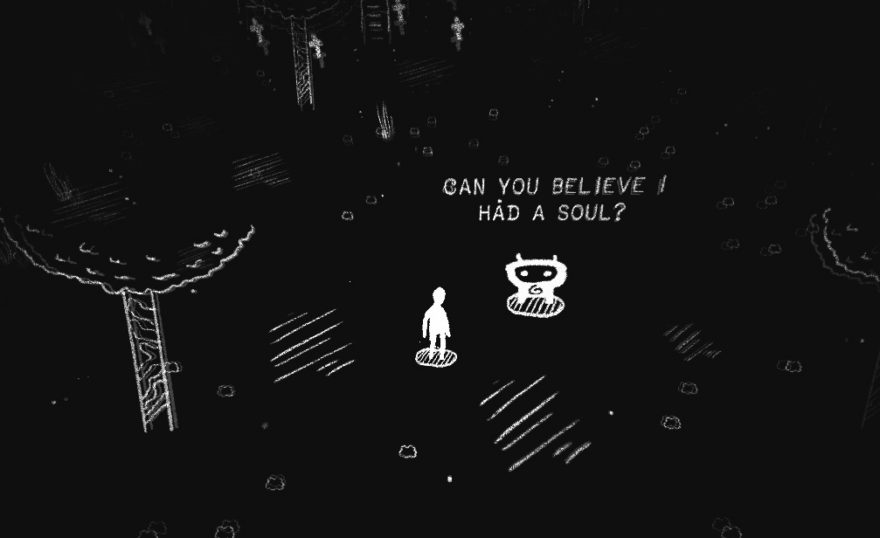 In the 80s and 90s, “indigo children” were a topic out of New Age philosophy that gained some mainstream popularity. The idea was that certain gifted children might possess unusual or paranormal abilities. It’s the kind of thing that would have made for a good X-Files episode, or if you’re developer Metkis, it makes for a good short game.

Indigo Child is about talking to ghosts, but it has an air of melancholy you won’t find in Wadjet Eye’s Blackwell series, despite the shared premise of a character who can talk to ghosts in order to help them find peace in the afterlife. Where Blackwell games are heavy on dialogue and feature the item-based puzzle design of older adventure games, in Indigo Child, the world is bleak, and communication is minimal.

Moving feels like walking through syrup. The puzzle isn’t really a traditional puzzle, so much as it is a logical set of interactions you have to figure out. The game does not provide hints or point you toward their solutions, and instead waits for you to stumble onto its logic. In order to bring ghosts from their uneasy resting places to their former owners, you must call them periodically to make sure they’re still following you. It’s rhythmic and mournful, but simple, without much of the investigation of death or its characters as you might expect.

Recently, there’s something of a psychological consensus that the idea of having an “indigo child” appealed especially to parents who didn’t want to consider that their children could have some form of mental health issue. It served as a kind of alternative diagnosis to explain behavior that would isolate children or change how they communicated. In Indigo Child, that isolation is blended with the sadness of three lonely deaths.

Metkis describes it as a “gamejam style experience,” which feels accurate—it’s the sort of small game that introduces an idea and starts to explore how to approach it. Here, the adventure game stylings are merged with a somber subject. The game lasts just long enough to convey a specific feeling, and then sends you on your way.