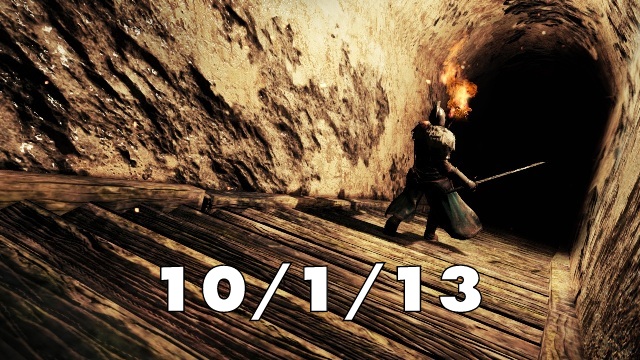 Just in time for Halloween season, Shinji Mikami, creator of Resident Evil, reveals that RE4 was originally a scarier, more traditional entry in the series before swerving into a more action-heavy experience. Just as long as he keeps The Evil Within, well, evil.

Those looking for satire, travel not to Los Santos. Leigh Alexander drops some knowledge on the truly subversive games out there like Papers, Please.

The Mysterious Cities of Gold was a big success in France, and with the help of Kickstarter will now be released elsewhere across the globe. Just try to get the happy theme song out of your head.

The Toadies once sang, “Do you want to die?” If the answer is yes, you’re already excited for Dark Souls II. Here’s a first glimpse at gameplay from the Japanese beta.

We’re all mourning the end of Breaking Bad. Buck up, everybody! Wear this Octodad shirt and feel the sun on your face again.

Want to feel the highs and lows of Michael, Trevor, and Franklin’s self-destruction even when not planted on the couch? Put Grand Theft Auto V’s soundtrack on and drive (safely!) through the streets.

Perhaps you’d like to work at Nintendo’s home offices in Japan? Get ready for a serious gauntlet of applications, tests, interviews, and group sessions. One man documented his attempt at joining the House of Mario.

We do not condone using robots to cheat at solving a Rubik’s Cube. But if you must, use the CubeStormer II. Now that’s artificial intelligence.