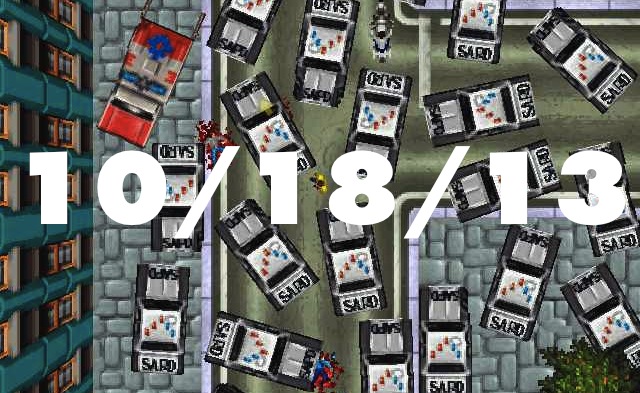 The original Liberty City in the very first Grand Theft Auto was a two-dimensional flatland of jagged angles. Now it’s creator is redoing that game in fat chunky polygons. Could be amazing.

Joe Bernstein goes inside the grandiose, triumphant, outrageous spectacle that is the League of Legends World Championship. So does Nathan Grayson.

A wild form of storytelling has appeared! Billed as “spacial storytelling,” IDNA uses your tablet’g gyroscope to let you see every angle of interactive narratives. Perfect for looking away from a hairy scene of euthanasia of the zombie-infected.

It’s entirely possible to read blog after blog about The Stanley Parable and not know what the game is about. After reading the developer’s take, you still might not be sure!

The accelerometer in this Chiba City-chic accessory allows the hearing impaired to easily use sign language in the dark. Looks like a great concept for a motion-controller, too.

The guys who made Myst are raising cash on Kickstarter for their new sundial-turner. Obduction. We’re guessing even the title is a puzzle of some sort.

In this profile, Nishikado the of father of the shoot’em-up admits that he can’t beat the first level of Space Invaders, the arcade machine that’s his claim to fame. That last squid is a doozy!