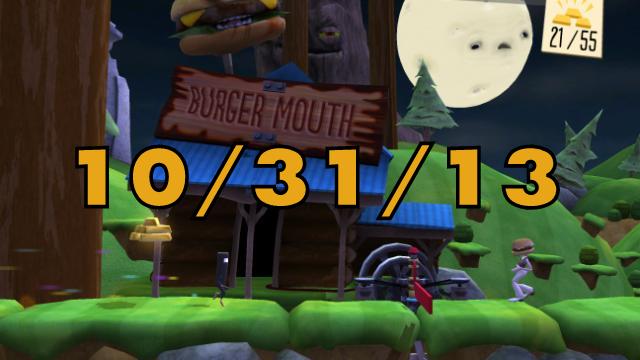 Because sometimes, there’s nothing scarier than a hamburger with legs. (BIT.TRIP RUN, the iOS version of Runner2, comes out today on the App Store.)

If we’re honest, comedy is primitive and underdeveloped in games compared to how it is used in other media… I actually think that because games are interactive, they have the potential to be funnier than books or movies.

Philosopher / Game Designer Bennett Foddy, throwing down the truth guantlet with Sam Rosenthal over at designerzord.com

Horror has always rubbed up next to comedy; we laugh to keep from crying, et cetera. This tease for White Heaven provides both, perhaps unintentionally.

A new study published in the Psychonomic Bulletin & Review suggests videogames that ask us to play roles besides our own (i.e., all of them) may make us numb to reality. But our pain tolerance is heightened! So we have that going for us.

Nintendo released financial results for the fiscal year’s second quarter. Though overall profits are up, some numbers are Freddy Kruegar scary: only 10,000 Wii U systems sold in all countries not named Japan or North America since April.

But at least the forthcoming Wii Sports Club will make good on the promising Golf Demo from E3 2011. Almost time to put on your Payne Stewart pants…

And finally: Halloween for the Atari 2600. Sometimes it’s nice to remember how far we’ve come, people.