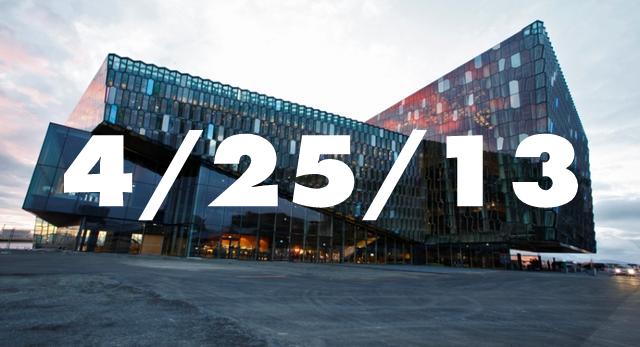 No, that’s not a spaceship. It’s the site of Eve Fanfest 2013, taking place this weekend in Reykjavik, Iceland. Bloomberg’s Businessweek.com explores the rich and loyal following for the fantasy MMO that’s captivated millions of players for over a decade.  The lucky few are even flown to Reykjavik, home to Eve’s creators CCP Games, to discuss the evolution of the series. (Look for Kill Screen co-founder and editor Jamin Warren giving his two cents.)

In the wake of disappointing financial results, one of the bright spots of Nintendo’s new console has been its social community Miiverse, which allows players to post drawings and comments from the Wii U Gamepad. Now others can peek over the garden’s walls via their internet browser.

Fish and Dinosaurs are so hot right now. Get two games featuring the exotic creatures, plus four other gems from Boston’s indie development scene, all while helping fund a rad festival.

In the wake of Microsoft’s Xbox Reveal reveal, Sony released a video touting their PS4 controller. It glows!

A fascinating bit of gaming history is tucked away in the FBI’s vault. Learn more about The Great Atari DRAM Chip Scandal of 1988 here.

The Electronic Entertainment Expo (E3) is fast approaching. Some shrug off its importance: Satoru Iwata of Nintendo announced it would not be holding a large press conference, instead focusing on smaller on-site events and a series of Nintendo Direct videos…

…while others try to crash the party, as Semiformal Studios launch IndiesCrashE3, an initiative to nominate your favorite small developers and get them in the door to the world’s biggest games showcase.

And lastly: Draw your own shoot-’em-up game. That’s right. Draw. We live in magical times.