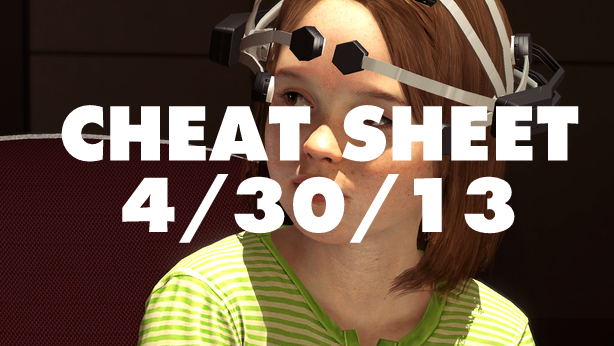 The sounds of spring are upon us: buzzing insects, shouting graduating seniors, Top 40 radio seeping from open car windows. Add The Pleasure of Sound to the list, an upcoming documentary about the importance of electronic music from Radiolab’s Jad Abumrad and Detroit-native DJ/noisemaker Matthew Dear.

While we’re nostalgic for what might have been: peep these NES-ified pics of Journey by artist Michafrar.

Virtual simulation games like Second Life are more likely to help with weight maintenance than face-to-face counseling, says an article in the upcoming issue of The Journal of Nutrition Education and Behavior. No word on PlayStation Home’s affect on real-life hoarding.

Another trailer! 100 Yen: The Japanese Arcade Experience released yesterday on DVD. How retro. The doc looks super-swanky and we hope kicks off an explosion of more public quarter-munchers in the west. (Until then, make thine pilgrimage here.)

Ahoy, Greenheart Games released their Game Dev Tycoon on Sunday with a special bug appearing only in versions illegally downloaded for free. The result? Your in-game company slowly goes backrupt due to pirated software.

And last but not least, parents FINALLY have a way to tell their children bedtime stories! All you need is, uh, special QR-code pajamas, a smartphone, a data plan, and purchased story apps. Note to future anthropologists studying our remains: We’re so, so sorry.