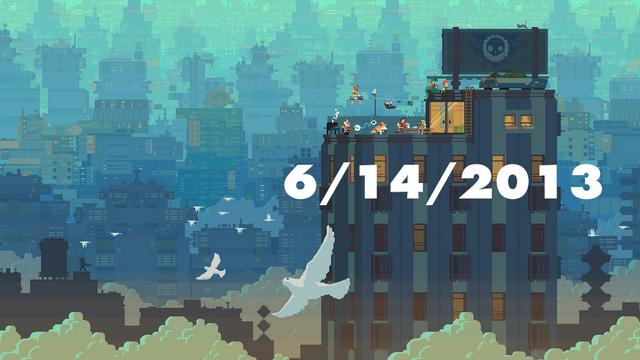 We did it! We survived. Not saying there weren’t casualties, as Sir Peter Molyneux points out. But for now we live to see another day. Now let’s all go clean up and pour a finger or two into a highball tumbler. Clink.

When Movie Licenses Run Amok, Part #1: Mad Max has a new  game? Gallipoli offers the better plot, but we’ll take whatever Mel we can get.

Lest we forget, E3 showcases not only the games but the artists behind them. Harold Goldberg highlights work from game art showcase Into the Pixel, including Mike and Vic Nguyen’s piece for Capy’s Super Time Force, seen above.

EA promises to not bring back their Online Pass system, where used game owners pay $10 to access multiplayer. Call us cautiously optimistic.

“We’ve got to put the player inside the experience, where no matter where you look you’re surrounded by a three-dimensional experience. That’s the future.” Steven Spielberg inadvertently talking up the Oculus Rift at USC this week.

Or is the future at the Museum of Contemporary Art in Los Angeles, where Venus Patrol and MOCAtv presented an indie-focused conference called HORIZON. First looks included Kachina from Little Flag, Mutazione from Die Gute Kabrik, and this splendid tease below…