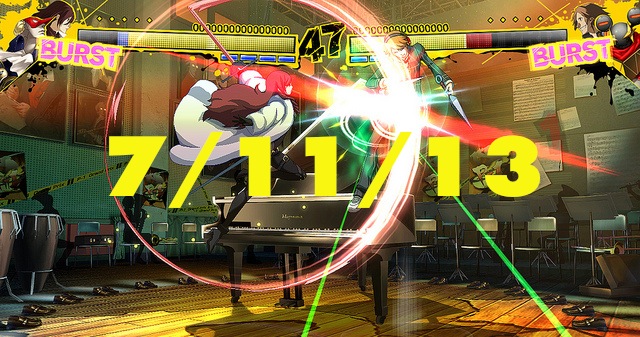 EVO may be the mecca of all fighting game players, but it’s not just for masters of the flaming shoryuken. A bunch of super fun indie games will be there too, including Kill Screen favorites Towerfall and Samurai Gunn.

DOT; A Videogame with No Winner is being shown, played, and performed at The Brick Theater in Brooklyn during the Game Play festival, now through July 28th. Guaranteed to frighten nearby animals and the infirm.

We get the Konami code mixed up with the one from Street Fighter 2, which is apparent blasphemy. But something very strange happens if you enter the Konami one at GQ.

Polygon brings us pictures of the Xbox Ones that never were.

Daigo Umehara is looking to reclaim his Street Fighter crown at EVO. And he will be using this rad custom fighting stick courtesy of NYU Game Center.

Remote Install is the artwork that installs itself from afar. So next time you’re about to complain about an 8 gigabyte game install, keep in mind that you’re actually witnessing art.

An interminable haul across barren desert, Desert Bus is quantifiably the worst game ever made. Elements has the story of the big-hearted bored people who marathon it.