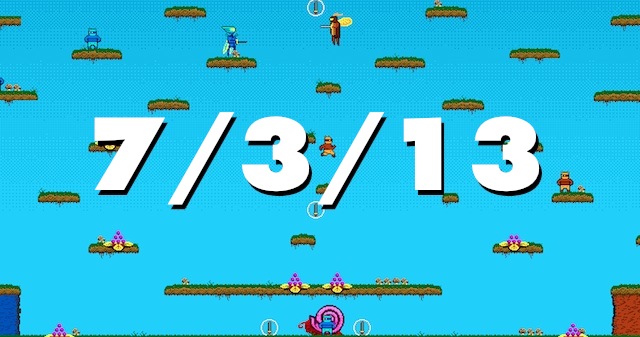 Killer Queen isn’t just an annoying song played at dive bars. It’s also a rad team-based 12-player version of Joust with bees and snails. And if you’re in NYC, there’s a tournament this Friday.

“My informants concur on one essential fact: the tango originated in the brothels.”

—notes from the journal of Jorge Luis Borges, the late Argentine writer fond of labyrinths and mathematical concepts of infinity.

Proteus, which still sets the bar for games that are made to be heard as well as played, is coming to PlayStation. W00T! Bust out the tie-dye.

Baseball is all-American, but also all kinds of boring. So Tom Russotti has taken to Kickstarter to fund the invention of new sports in Moldova!

Fract, described as Myst meets Rez meets Tron, is being backed by Indie Fund, angel investors of favorites such as Monaco, Antichamber, and Dear Esther. Their neon thank you note, below.

Thatgamecompany, you know, those guys of Journey fame, had a Reddit-style Q&A on Twitter yesterday. It’s worth perusing, if only for their endearingly liberal use of emoticons.

Not unsurprisingly, World of Tanks, the title that singlehandedly defines the tank genre, comes from a land that was once literally a world of tanks, the little known country of Belarus. Also, tanks!

This striking home in Ibaraki is the chess board of modernist architecture.

The Dwarf Fortress guys claim they were offered an amount in the range of six-figures to license the name of their esoteric, unapproachable, and cloistered dwarf commune disaster sim. I’m just wondering what spendthrift marketing exec thought that was a good idea.

Because bears need their beauty sleep…

And in case you’re in desperate need of something to play over the hot summer holiday, the new Walking Dead episode will be here shortly. (Unless you’re playing on iOS, meh.)

Have a safe and awesome Fourth!