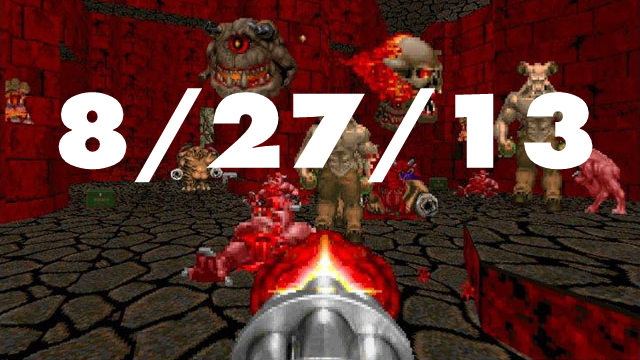 Reality is Broken author and Gameification advocate Jane McGonigal gave the convocation speech for Miami University in Ohio and turned it into a paper-plane-flying, advice-giving “infinite game,” in James Carse’s terms. Don’t crash and burn, Class of 2017.

On your grade school syllabus this fall? Perhaps this book about physics in a collaboration between National Geographic and… Angry Birds.

Few publications have been following the videogame beat as long as EDGE. To celebrate their 20th anniversary, the next issue will feature twenty separate covers, one for each year’s most notable game starting with 1993’s Doom, with commissioned art by Marinko Milosevski, Jesse Kaisala, and others.

Nintendo released a boxed retail copy of New Luigi U on Sunday, the game-length downloadable content for his brother’s 2D Wii U launch game. This documentary reveals the truth of the younger brother’s mad hops.

Videogames have safely slung obscenity for some time now, ever since the ESRB’s formation in 1994 stamped a rating on every box. The New York Times finally joins this grand tradition with its first ever publishing of the word “f**k.”

Nintendo’s maligned Virtual Boy, 18 years after its release and quiet death, still has a passionate base of homebrew developers. Now a lucky few can play Street Fighter II in red-and-black 3D.

If you’re going to text and drive at the same time, you might as well practice. Holden Link’s SMS Racing, an entry in the Ludum Dare “10 Seconds” game jam, lets you do just that.