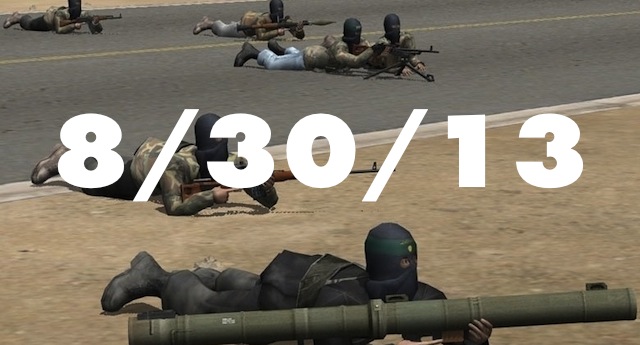 This Sunday, we’re hosting a dialogue with Proteus and Dyad soundman David Kanaga. He’s one of the most enlightening minds in interactive sound design. So, see you at MoMA PS1!

Combat Mission Shock Force is the shooter that asks: what could happen if the U.S. launched a military campaign in Syria. Looks like we’ll see.

This playground built on top of the site of Hitler’s cremation site is real. Which is kind of beautiful, but also spooky.

Kentucky Route Zero, Gone Home, and a wonderful-looking little game we’ve not heard of called Fjords are among the selections for Fantastic Arcade Festival.

On the heels of their survey about books people lie about reading, Book Riot asked their readers which guilty pleasures they’re too embarrassed to fess up to. The top three:

On the games front, Style Savvy definitely falls into this category.

Perhaps best described as Smash Bros. meets Kurosawa, the red dead finale at sundown in Samurai Gunn is one of the most intense, austere, and tragic moments we’ve experienced with a game all year.

“One of the things that influences the teamwork is how lethal you are.”

—Randy King, the producer of America’s Army: Proving Grounds, the latest in the series of free-to-play shooters that aspire for realism and double as an U.S. Army recruiting tool. Creepy.

To some developers and players, games are one long buzz feed, supplying a steady flow of dopamine. But not so fast. According to this report, dopamine has little to do with actually enjoying things, especially games.

“Hands off that fly swatter, chump.”