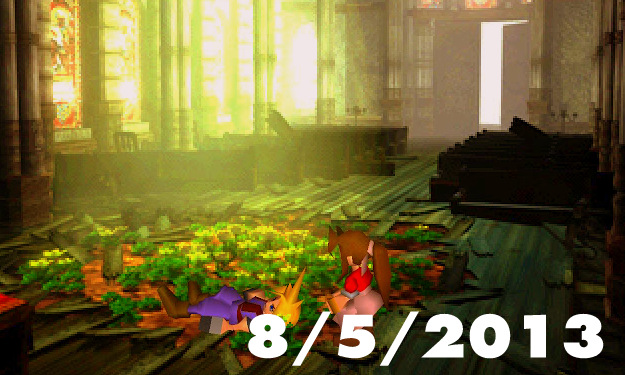 Turns out that you can be too much of a Final Fantasy fanboy (our intern refuses to believe it). Final Fantasy 7: The Web Series, a real-life enactment of FFVII‘s story, was forced to close its Kickstarter page after a cease-and-desist letter from SquareEnix. Looks cheesy, but doesn’t that music take you back…?

We miss Arkedo. We liked their games and sense of design. So it’s a happy day when ex-Arkedo’ite Aurelien Regard announces he’s continuing work on an old project from before the company went under. Say bonjour to Poöf!

Alleviate your anxiety towards the NSA/CIA and watch drones do something cool–a fly-over video of an abandoned mining outpost in the Sierra Nevada. Pretty neat.

Whore of the Orient, Team Bondi’s follow-up to L.A. Noire, has been shrouded in mystery. After Bondi’s split with Rockstar Games and the company’s debt of nearly $1 million to its employees, it’s heartening to see some actual video content leaked. Albeit from a “trusted source” for VideoGamer.com. Guess all we can do is wait and tap-dance like Ken Cosgrove.

Eeeeeeeek. Eeeeeeeeek. As a wise woman once said, “this does not bode well…”

Blizzard’s World of Warcraft lost 1.6 million subsribers during the first two fiscal quarters of 2013, prompting many to think about where the future of massively multiplayer games may be heading. Perhaps it’s time for the fetish of Euro-medieval themes in MMOs to become oh-so-passé?

Atlus is on the market to get swooped up–and Sega might be the one to add the developer to its well-endowed arsenal. With projected bids at around ¥20 billion ($201 million), let the skirmishing of the capitalists begin…

After the Gods is an augmented reality (AR) game out for Android. Its directions state to “combine effects (such as daylight and heavy rain) to grow flora, swirl dust storms, and drown the forlorn sky in cascading waterfalls of shimmering joy.” It may be the cleverest video game about cultivating the good earth since Harvest Moon: Friends of Mineral Town… except there are no cute sheep or marriages. Just surrealist-interactive gardeners in a land abandoned by gods? ‘Kay.