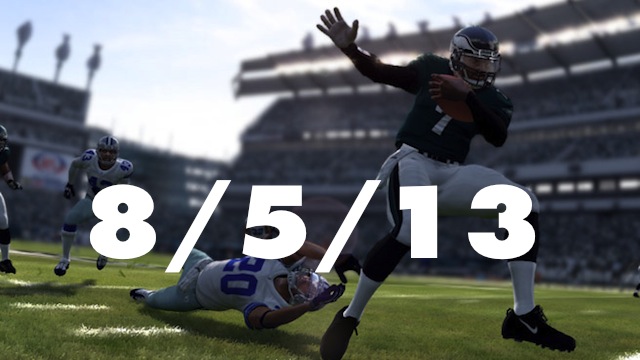 Our good bud Joe delivers an interview with a fine gent who has penned a whopping 3.5 million word fan-fic! I’m pretty sure that puts it at the longest fictional work ever written.

We created technologies that make the simulation of a grenade launcher way easier than a caress. That is a problem.

—Politcal game dev Molleindustria on the state of the virtual hug.

EA has made the questionable decision of naming Michael Vick as the starting quarterback for Madden’s “All-25” team. Well, the man was unstoppable in Madden ’04.

Nobuo Uematsu, composer on basically every Final Fantasy game ever made, is releasing a spectacularly musical e-book.

I don’t think we’ll ever get sick of the GLaDOS voice, so listen to her cover the chorus at this marriage proposal at GaymerX.

What’s all this buzz about the rerelease of a twenty-year-old Super Nintendo game? Simon Parkin explains the quirky charisma of Earthbound.

Just going of hearsay, but it’s seems a lot easier for game makers to government funding in countries outside the US of A. Gamasutra talks with the National Endowment for the Humanities about how to get stateside grant monies for videogames.

The Facebook Platform is a shape-shifting, chimeric shadow of suffering and despair, a cruel joke perpetrated upon honest men and women at the brutish whim of bloodthirsty sociopaths sick with bilious greed and absent mercy or decency.

—Theorist and popular game-person Ian Bogost opens up a can of poesy on Facebook’s game platform.