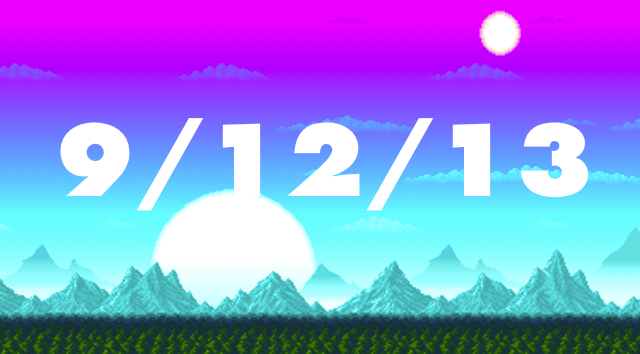 In NYC tonight and crazy about Hokra, the ultra-fun back-to-basics 2-on-2 competitive sports game? NYU’s Game Center is hosting a talk with its creator Ramiro Corbetta.

“Oh, fucking do it!” he said. And then he just walked back out of the room.

–the way decisions are made at Saints Row HQ.

Activision will fight The Violent Content Research Act of 2013 by hiring a lobbying group. They certainly have plenty of money to smother the bill with.

IndieCade, the Sundance of indie games, (or is that IGF?) has released a list of this year’s finalists. The nominees look great!

When we were a kid, controlled substances were required to do this:

Wired looks at the pixelated GIF of Noirlac, who’s posted to his tumblr thousands of flickering cityscapes, pulsating skulls, and scenic vistas—all ripped from classic games. We’ve been following him for a year, and totally recommend it.

Yeah, we’re into the idea of virtual theater, of a virtual actor. Like the girl in white in The Path was from a project called 8, and now we’re going to put her back in 8 again. To us, it’s the same exact girl. The same personality. She’s an actress, she can be in any story.

–Auriea Harvey of the art game collective Tale of Tales

The League of Legends World Championship is upon us. Polygon has this handy-dandy guide to help newcomers makes sense of this ungodly deep game. The glossary is essential:

Duelist: A champion who excels at 1-on-1 combat rather than group fights.
Exhaust: A Summoner Spell that slows an enemy’s movement and attack speed as well as reducing the damage they deal. Most commonly seen on Supports.
Facecheck: To blindly enter the brush without checking it first in some way. This is very dangerous and can be a deadly mistake, as enemies may be lying in wait.