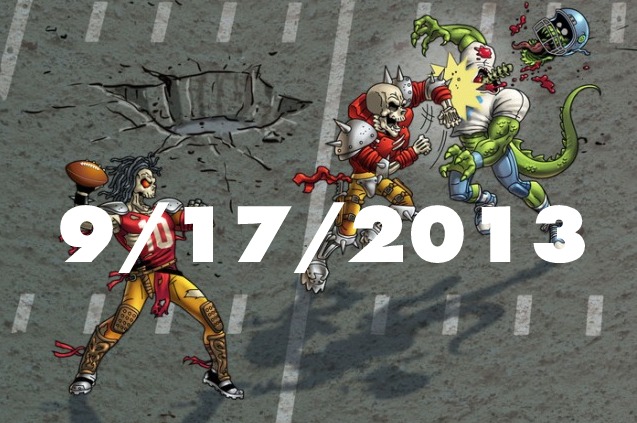 Apple’s new biometric identification in their just-announced iPhone 5S could deliver clever new ways to play. Or…  it could infringe on your constitutional rights.

What happens to a person whose whole life was her voice? Now that it’s gone, what is she going to do? We wanted to create that kind of character and put her in this situation and see where we would go with that.

Supergiant Games’ Greg Kasavin on Transistor, which is apparently more like The Little Mermaid than previously anticipated.

Human football is fine and all. But sometimes we enjoy a throw of the pigskin with the mutated undead. Two decades ago Michael Mendheim helped create the original Mutant League Football for Sega Genesis. The Mutants are back.

Ubisoft’s newest 2D games, Child of Light and Valiant Hearts, run off their own custom graphics engine called Ubi-Art Framework. Managing Director Xavier Poix talks to Gamasutra about the why and the how.

People love writing about the addictive qualities of casual games. Here’s your latest dose from Grandland, focusing on the sickly sweet charms of Candy Crush Saga.

GTA has become sort of like the Star Wars of modern gaming, and it’s hard to make one of those franchises let alone more.

David Kushner, who literally wrote the book on Grand Theft Auto, on why Rockstar will keep making them to the neglect of brand-new games.

XSEED surprise-announced the cult favorite Deadly Premonition is now available digitally on Xbox 360. A low print run makes this game hard to find. No excuses now! Below, a reminder of its powers.