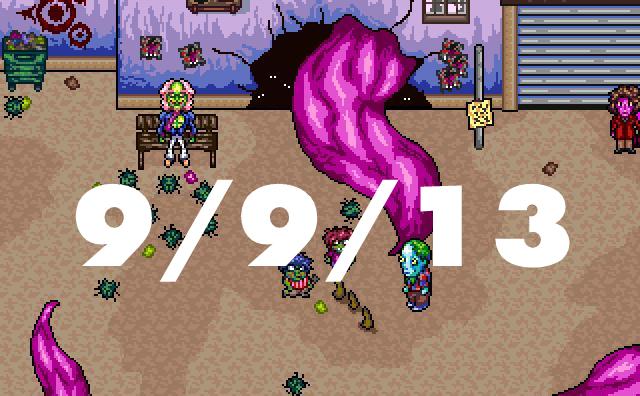 Godus, the new game spawned from Peter Molyneux’s billion-block busting app Curiosity, will be all about milkshakes. Maybe.

The NFL season is upon us! And in preparation, EA has simulated the 2013 season using Madden NFL 25th Anniversary Edition. And the winners are…

The world of Dear Esther left players with more questions than answers. This is often a good thing. Developers The Chinese Room uncovered old script notes for those wanting to poke around and scrape at the edges of the game’s mystery

This Kickstarter campaign for Octopus City Blues has one of the most generous reward tiers we’ve seen yet: Lunch with the developer for $1! All you have to do is travel to Kuwait. (The game looks rad, too.)

Hotline Miami 2: Wrong Number might be less wrong when it comes out, as they consider nixing a sexual assault scene.

Time to cheer up with maybe the most horrifying sixty second introduction to a video ever. Yesterday Nintendo and Capcom revealed more details about the upcoming Monster Hunter 4 for 3DS, releasing in Japan this week. Not your typical internet cat clip.