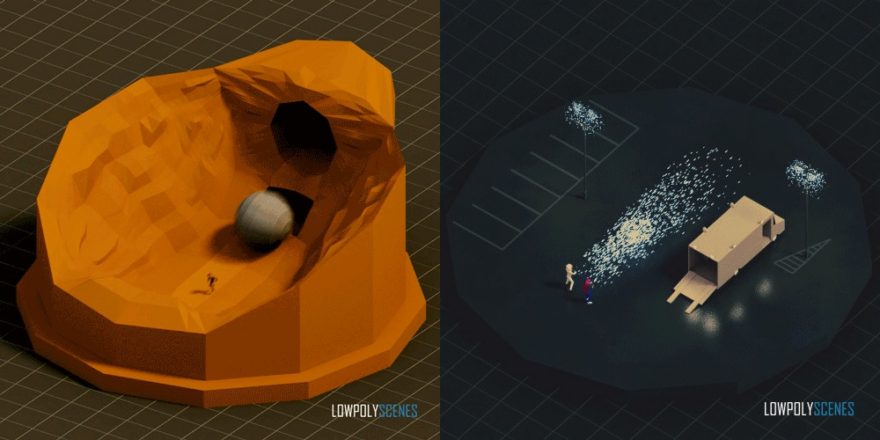 Brazilian artist Bruno Alberto is a man on a mission: take every movie you loved from your childhood, pick a scene from it, and turn it into a gorgeous low-poly animated diorama. So far, Alberto has only shared four on his LowPolyScenes Facebook page, but boy, they are a good four.

Let’s start with his rendering of Free Willy (1994), which obviously depicts the scene where a henchman eats popcorn evil-y… OK, I may be lying. What other scene would you pick from this movie aside from the one where Willy, as promised, finally goes free? It’s a bit sped up, but everything is there, minus Michael Ironside telling the audience how much he hates this specific marine mammal.

Moving on to Star Wars (1977), we have the Death Star trench run, and this one is almost kind of sad. Watching Luke and Vader bounce back and forth in a loop and seeing Vader just almost hit him every time makes me feel for the Sith Lord, at least more than the prequels ever did. You’ll get him one day, buddy (or at least his smuggler friend).

low-poly is a natural fit

Next up is Indiana Jones (1981) and its classic boulder chase scene, and seeing it from an overhead angle, that boulder is coming in fast. I’d assume he died if I didn’t know the source material, but sadly, he does survive to father Shia LaBeouf. You were so close, Indy!

Coming in last is Back to the Future (1985), and I think it may be my favorite. It’s the scene where Rick—sorry—Doc shows off the time machine to Marty, and it’s probably the one where the low-poly aesthetic shines most. Here, Alberto has depicted the DeLorean’s time travelling by showing it turning into a stream of particles just as it makes the jump. It’s a nice detail that wasn’t in the original (though that did feature sparks in front of the car), but it fits so well that I almost hadn’t noticed it was new.

I’ve probably spent more time with these scenes at this point than I did with the originals, and there’s a reason for that: they remind me of the best parts of my childhood, depicted as I remember them rather than as they are. Combining ‘80s-’90s movie nostalgia with the low-poly look is a natural fit, as it was during the end of that era that low-poly started to become prominent. If you want to check out these GIFs for yourself, and see more as they come in, follow Alberto over on his Facebook page.

Oh, and here’s a bonus scene from Game of Thrones for ya, straight from Alberto with love, of course.